Arrived in Florence via train from Desenzano al Garda.

Took a taxi to the apartment (vs the Metro, and walking – so tired of walking, HA!).

A host from the apartment company met us there and showed us around. The place was huge!! 2 bedrooms and 2 bathrooms with a big living room and big kitchen. There was a long hallway coming in the front door. And an outdoor patio that had been one of the reasons we booked this place. Unfortunately, the Patio was also at the bottom of 5 floors of the building. Picture the building being shaped in a square. Like an O. The patio was at the bottom of the middle of the O. Yes it was open to the air…. 5 floors up. LOL. Still it was pretty nice. The whole place was gorgeous. Arched ceilings, and tile floors, and beautiful antique furniture. The host pointed out the spiral staircase to the basement which was gated.  He told us we don’t have access to it. LOL.  I don’t want to go down there anyway!!!

I should really take pics of our airbnb places, but I don’t. Ha. Here is one pic that shows the ceilings. So beautiful. 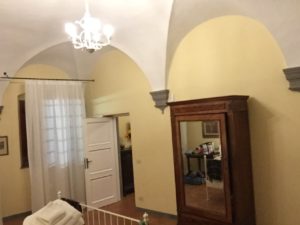 The girls were tired from the travel so Becky and I headed to the grocery store with Laney where we found some good stuff. Artichoke ravioli and great meat and cheese offerings. We got some pasta for the girls. Some breakfast food, wine, chocolate and fruit and we were all set!!

After unpacking Becky and I headed out for a walk. We ended up by the river where there was a lively music and food/bar scene. We stayed a bit then headed home

The next morning Laney and I were scheduled for a cooking class. We met in a piazza across town and one of the chefs took us to the central market and showed us around. It was quite an experience. All kinds of food I had never seen before. Apparently tripe is a big thing. Not something I care for. Also other delicacies I couldn’t even name. We learned a little about the chianti wine that is specific to this region. And olive oil. And balsamic vinegar.

We then walked a couple blocks to the kitchen. Where we started two different kinds of sauce. A bolognese, made with meat, and a rustic summer sauce made with plum and cherry tomatoes.  Once those were going, we made our tiramisu!  Guess what I didn’t know? It’s made with raw eggs. This doesn’t bother me, but it might bother some people. Marscapone cheese is combined with egg yolks (and a LOT of sugar), then whipped whites are folded in to make the cheese/sauce. We layered that with cocoa powder and lady fingers (which are hard like a cookie when you start) dipped in expresso. Then we applied some creativity to design their look (designs on top with lady fingers or cocoa, etc.)

Now, the main feature. The Pasta. This was insanely simple. Mixed a cup of flour with a large egg on the counter. Kneed it until it bounces back when you poke it with your finger. Wrap in plastic wrap and let it sit 30-60 minutes, then roll it and cut it. We made some ravioli for the rustic tomato basil sauce and some strips of pasta like linguini for the bolognese.  Guess what else I learned? the stronger/bolder the sauce, the bigger the pasta you use. As far as thickness of noodles, or whatever. Makes sense right? The chef mentioned that with wild boar sauce, you would use very wide noodles. (I had this later in the week – yum). 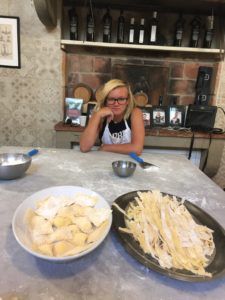 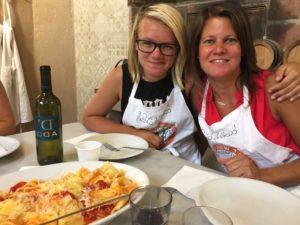 After the cooking class, Laney and I intended to meet up with Becky and Kaitlyn for some sightseeing, but after all that pasta, tiramisu and wine, we were beat. So, after taking the creative way home (i.e. we lost our way for a bit), we rested a few hours.

The four of us went out for Ramen that night. Strange choice for Italy perhaps, but we’ve had PLENTY of pizza and pasta. LOL. and it was close by. It was really really good.

The next morning, Laney and I went to see Michelangelo’s David. Laney was less than thrilled. She was a real trooper, though, considering we waited in line 2 hours for something she didn’t even want to see. I had to laugh when, while standing in line, I bought us coffees, and they had David right on the cups. HA! Laney was mortified. 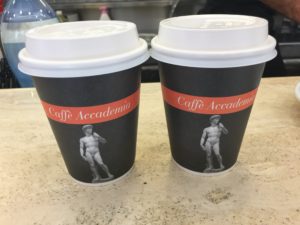 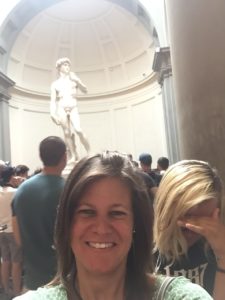 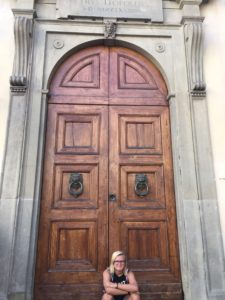 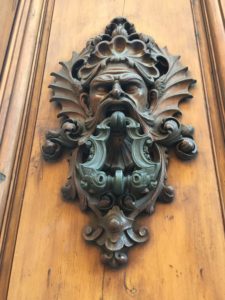 After David, Laney and I chilled with some cold coffee (and wifi) in a coffee shop, then had lunch with Becky and Kaitlyn.

Then we headed over to the train station to join our chianti wine tour. We drove way out of Florence to Sienna (or near there) and visited 2 wineries. The first one, we learned a lot about different kinds of wines and the certification of chianti wine in this region. The highest rankings require at least 80% of the grapes be from this very specific region. In the case of this winery, they use 100% of their own grapes. We saw some of the equipment that is used to make the wine and the fermentation tanks and the ageing barrels. All very cool.

We tasted a few different wines, and some olive oil, truffle oil, balsamic vinegars with some meats, cheeses and breads. The girls didn’t like the red wines (Chianti’s) as much as they have been enjoying the white wines recently.  Laney was the only one who liked the Grappa they served at the end (insert eye roll here). 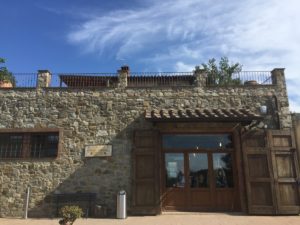 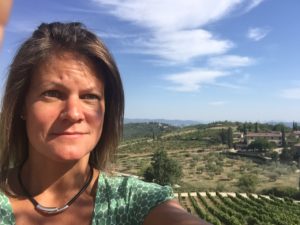 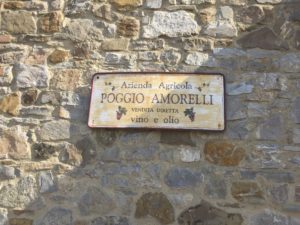 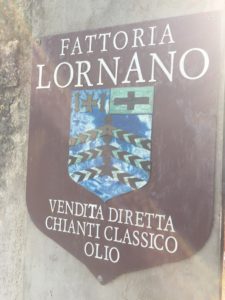 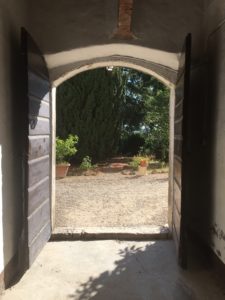 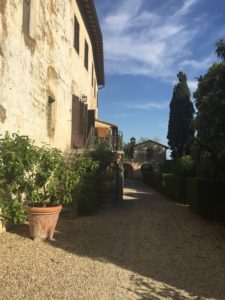 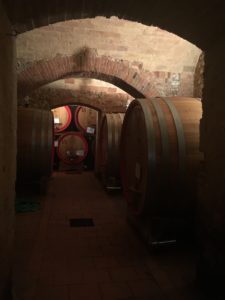 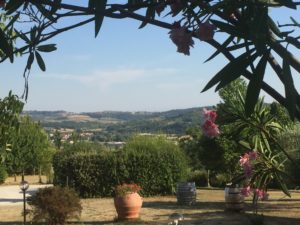 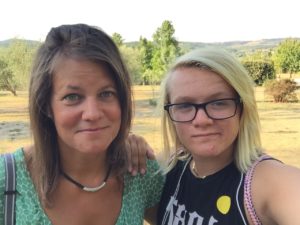 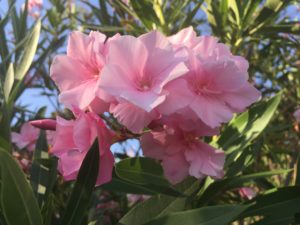 The last stop on the wine tour was at a small fortress town. We walked the wall, got some gelato and it was time to go! 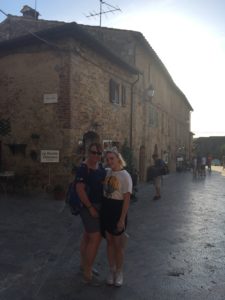 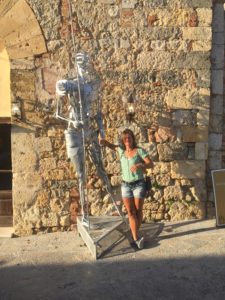 Then we headed home. Ate up some of the remaining ravioli, and crashed.. The next day was another travel day! This time, on to Rome!