Arriving in Porto from Barcelona was a bit of a let down. Had to say good-bye to Matt, and plus, I was EXHAUSTED.

We arrived to the most adorable and CLEANEST Airbnb I have seen yet. This woman was maniacal about cleaning. HA.

We had a lovely outside seating area, which I promptly relaxed in (right after a trip to the store for food, beer and wine of course.).

The next day we literally did nothing. I knew we had a busy day coming up (Canyoning) so I used this to add to my justification. I did some blogging, some planning, etc. and I think we finally left the house around 7 to get some dinner.

We ended up eating at a place around the corner. The choices weren’t great because it was Sunday and lots of places are closed. The food was OK. I had pork pizza bites (a local specialty, I think) and some sautéed mushrooms. Laney had lasagna bigger than her head. It was SO MUCH!

The next day we were picked up at 9:00 for our Latitude41.com canyoning tour. I had no idea what to expect. I had actually booked this without completely knowing what canyoning was, but the reviews were good. HA. We did get a bit of a description from Lee, who showed us rock climbing, in Edinburgh.

We were picked up in a big, beautiful, black pickup truck. Our guide/driver didn’t speak TOO much conversational English, but it was enough. AND, our soon-to-be-new-friend Amy was in the front seat. I didn’t catch it before I asked her but realised quickly that she was from Australia. WELL, there’s a whole realm of conversation THERE, considering we’ll be there in a couple months. AND it just got better from there.

It was a LONG drive up some crazy windy, small, one-car wide (in my opinion) roads. OK it wasn’t that long. About an hour. We stopped for coffee/pee break/food, though the bathroom was closed (HA), and then finished the drive. We met up with the rest of our group too. First I thought I was seeing double. The driver of the other (much smaller) car looked just LIKE our driver. Twins. Yup. Twin guys in probably their mid-to-late 40’s? And the other 4 people in the tour for the day. Those all in their late 20’s. We got geared up – we were given climbing harnesses, helmets, a VERY thick wetsuit (even though it’s like 75 degrees outside), and water shoes. We were told to only put on the legs of the wetsuit because the walk would be uphill and hot. YUP. It was. I should mention, all this was on a small turnout on the side of a dirt road. We had left paved roads behind like 30 minutes ago. Since then, all dirt, all on a cliff. Very cool.

After we all geared up, we were led up the mountain, basically. The walk was pretty darn tough. Pride kept us going at a good pace, though, even then I thought we might die of heat exhaustion. The ‘small’ amount of water we brought with us (we were told we were unlikely to want it) was gone before we even started the canyoning part. HA. just the walk up and gearing up we drank it all. No worries

SO, we get started. We repel down about a 40′ cliff. The last 10′ have no rock to push off of (the cliff curved inward at the bottom, which we didn’t see from the top) – so, just fall into the water. HA. GLORIOUS COLD WATER! We were SO HOT at this point. The water was insanely clear.

SO it went, down this river in the middle of a mountain. Walking, rappelling, zip-lining, jumping. SO much fun. The weather was about as perfect as it could be. Sunny and warm, dry air, with cold water to keep us cooled off. At the end, we had a little bit of a walk (some of it uphill, much to our chagrin) and then a walk through a cave. Much larger than the caves in Galway, but still pretty cool. this one looked man-made. I didn’t have a chance to ask.

We got changed by the truck (yes, all of it) – it was relatively private. HA. only the chickens were watching. Then, we were told, there is a bar up the road (more uphill?). It wasn’t far, and now ranks as my favourite BAR of all time. I had a few beers, some mystery meat sandwiches (hot white meat, probably chicken, maybe pork, with a light coating of some kind of red sauce, on a warm bun). DELISH! Or maybe I was just STARVING! HA!  We chilled out in the sunshine for a while, getting warmed up again, then we drove back to Porto and were dropped at our Airbnb. We made a connection with Amy and hoped to see her the next couple days, which we did 🙂 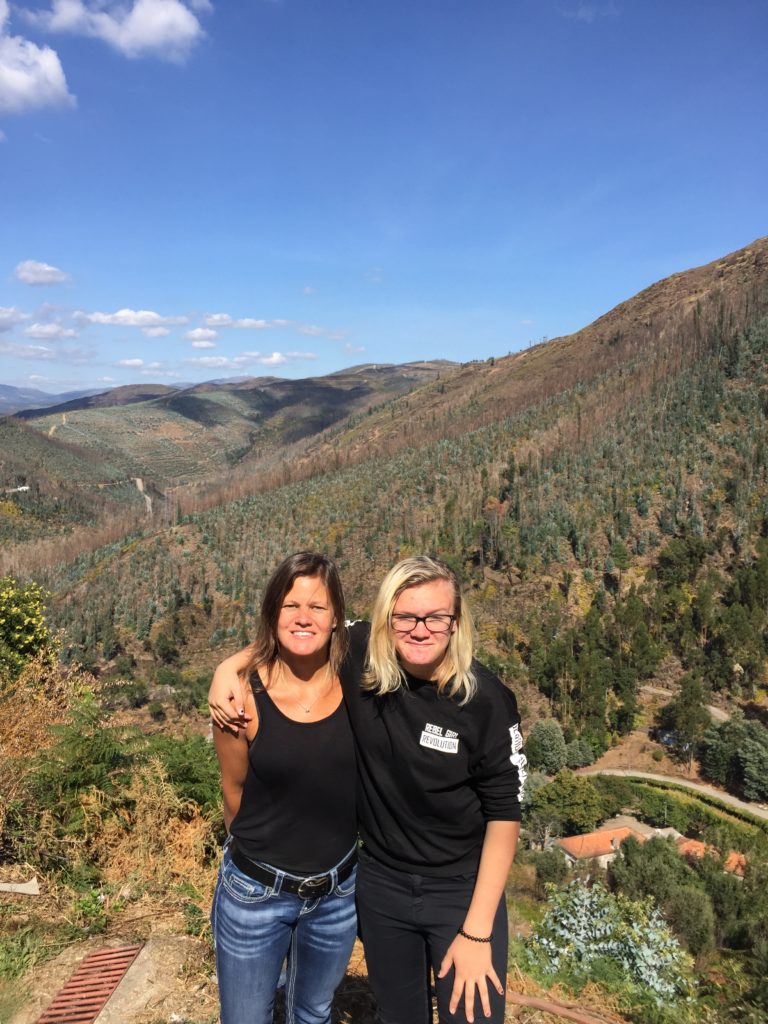 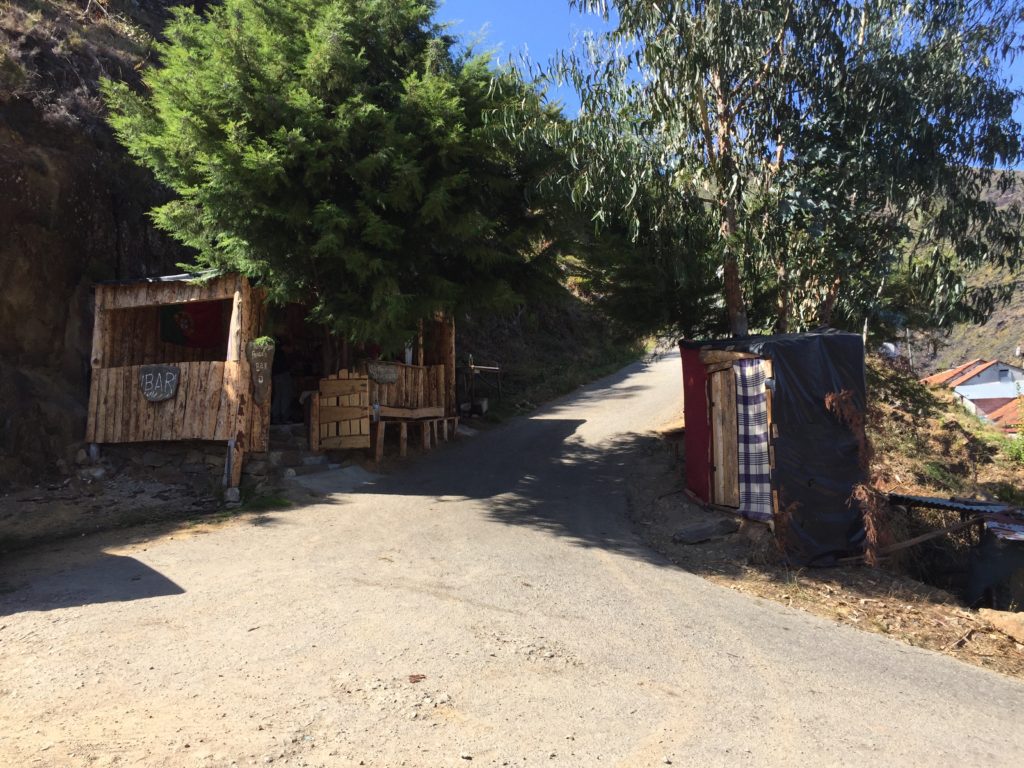 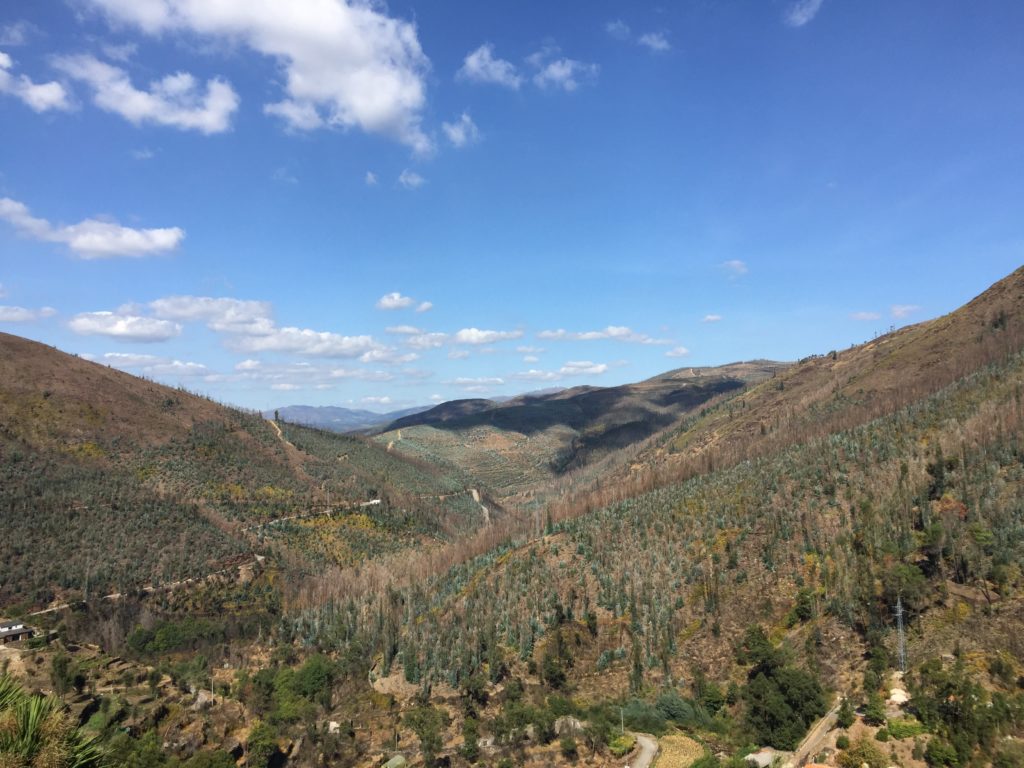 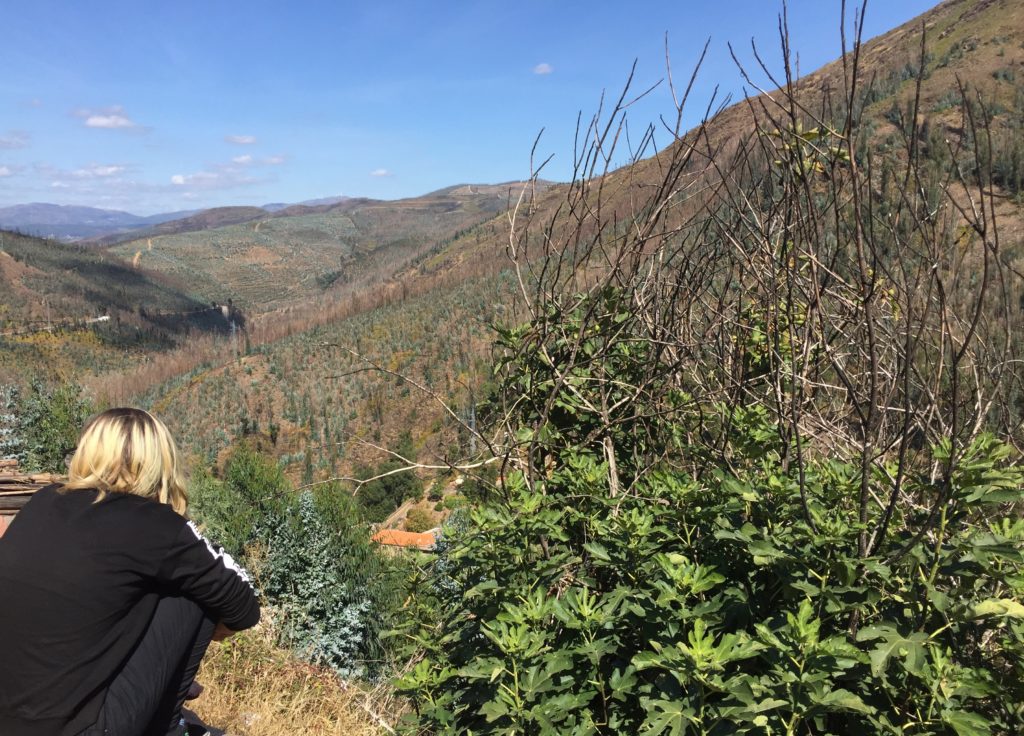 The next day I forced us out of the house to see something of Porto (this can be a struggle at times. I know you have no sympathy but travel is TIRING and so is canyoning :)) . Anyway, we wandered a bit, went to this museum that was supposed to be fun and educational. It was not fun, ha, but maybe a little educational. Then we met up with Amy, for a port wine tasting. AWESOME. Then we went to a bar/restaurant for sunset and a drink, then to dinner. I had this very traditional dish called Francesihna It’s basically a sandwich with multiple kinds of meat, including some that looked like chicken/pork, and some that looked like pepperoni! Covered in a layer of melted cheese, with brown sauce drizzled on top, with a fried egg on top!  It was great spending all this time with Amy. She is a very smart, independent, traveling woman of only 26 who is moving from Australia to Scotland for a new job. And took 5 weeks off in between. Awesome. 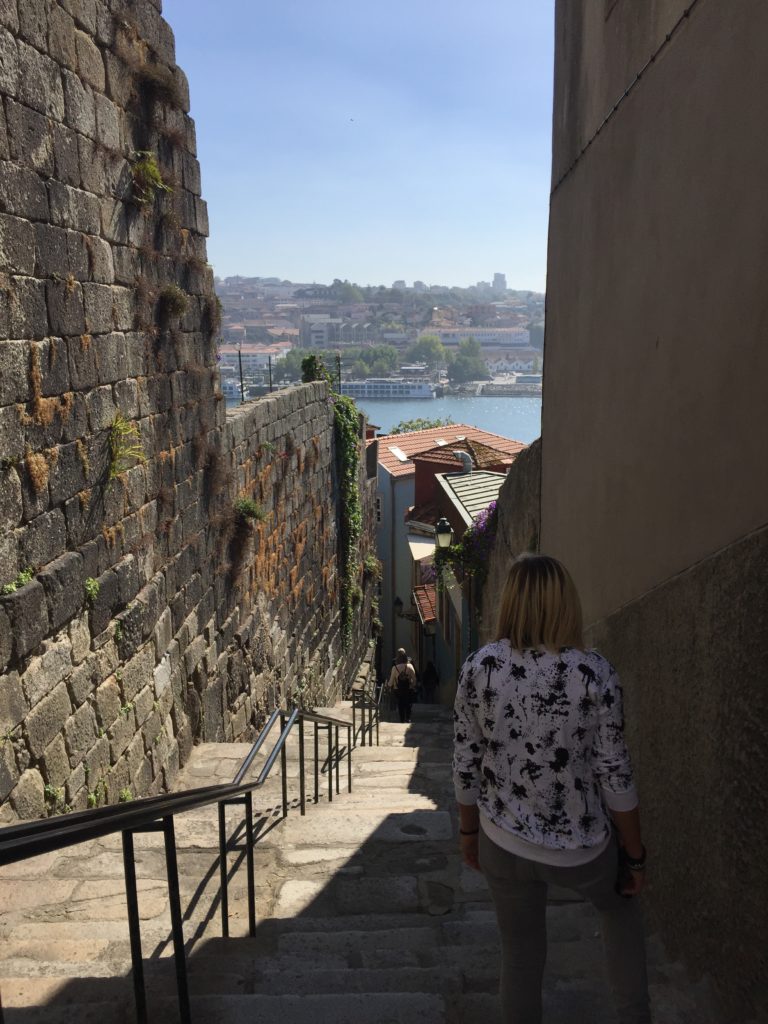 The pic above I took along the way to the river in Porto and to the museums. 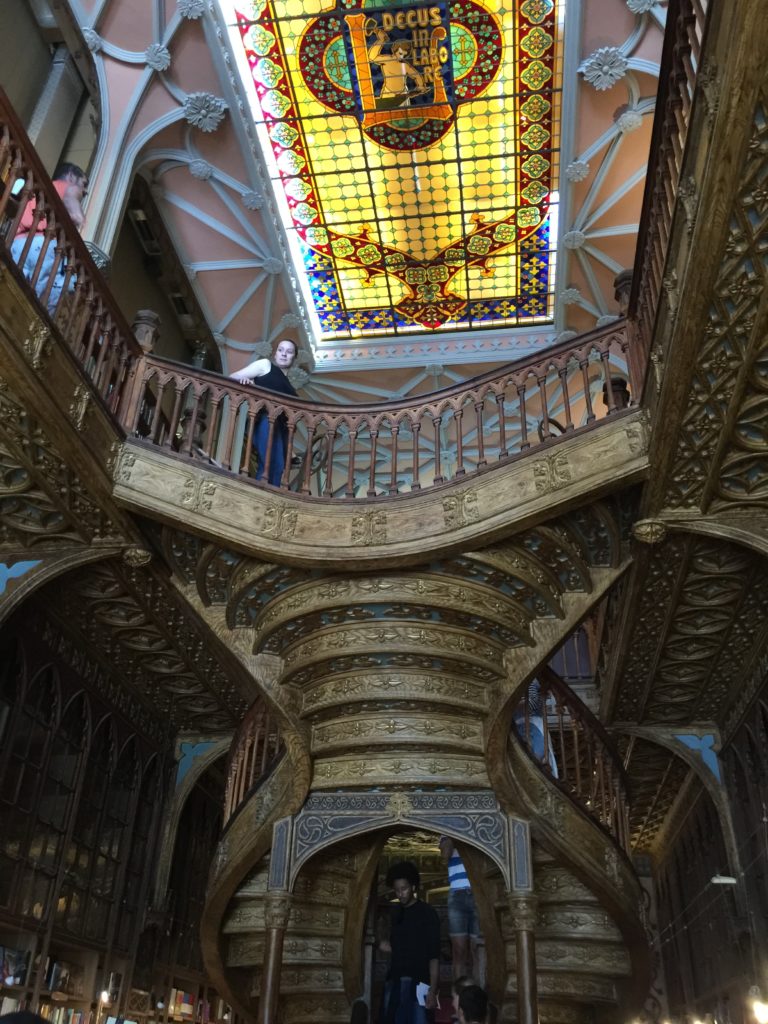 This, above, was a famous library (now bookstore) in Porto that is claimed to be the inspiration for the Harry Potter library. JK Rowling was a professor here at the time the books were started so it’s certainly feasible.

Below is one of many plaques in that same library. 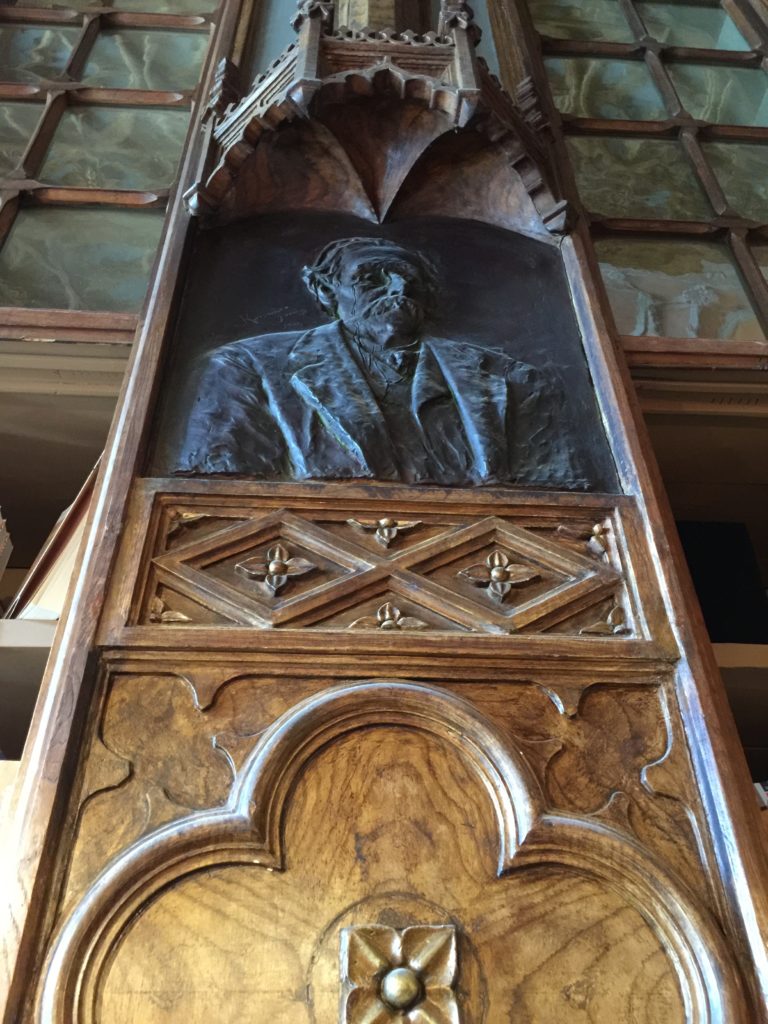 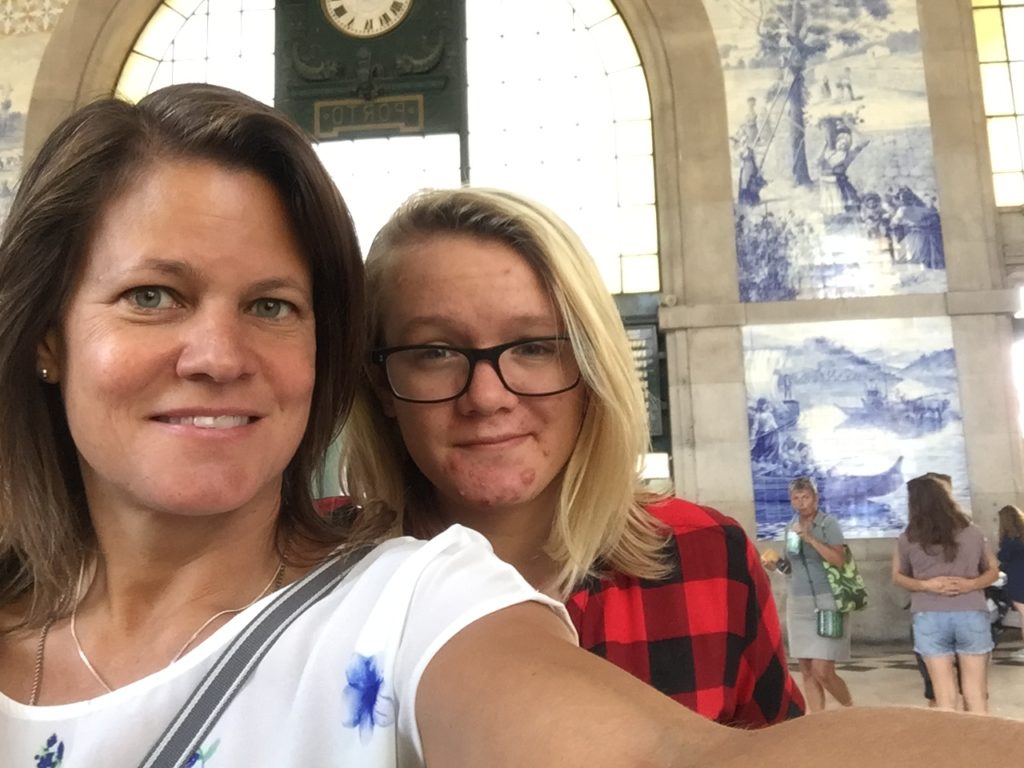 This is a famous Porto train station, beautiful artwork all around. 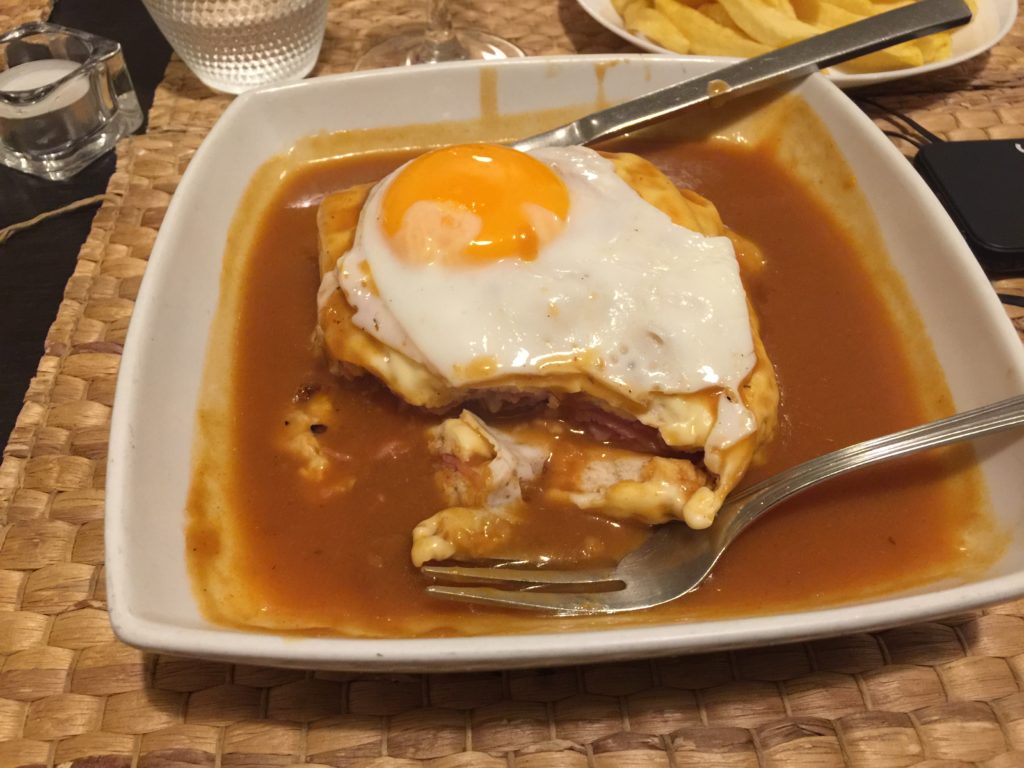 This is that crazy Portuguese dish. Fancesinha . SO FREAKING GOOD!

This is an official description: Francesinha (meaning Little Frenchie or simply Frenchie in Portuguese) is a Portuguese sandwich originally from Porto, made with bread, wet-cured ham, linguiça, fresh sausage like chipolata, steak or roast meat and covered with melted cheese and a hot thick tomato and beer sauce served with french fries. 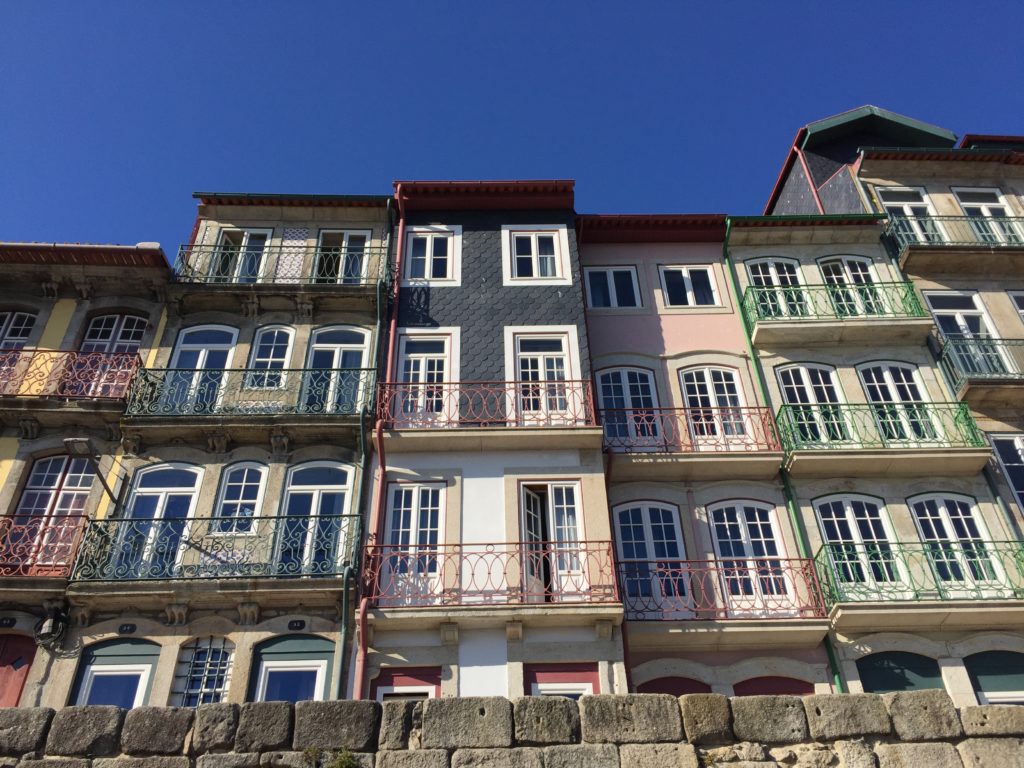 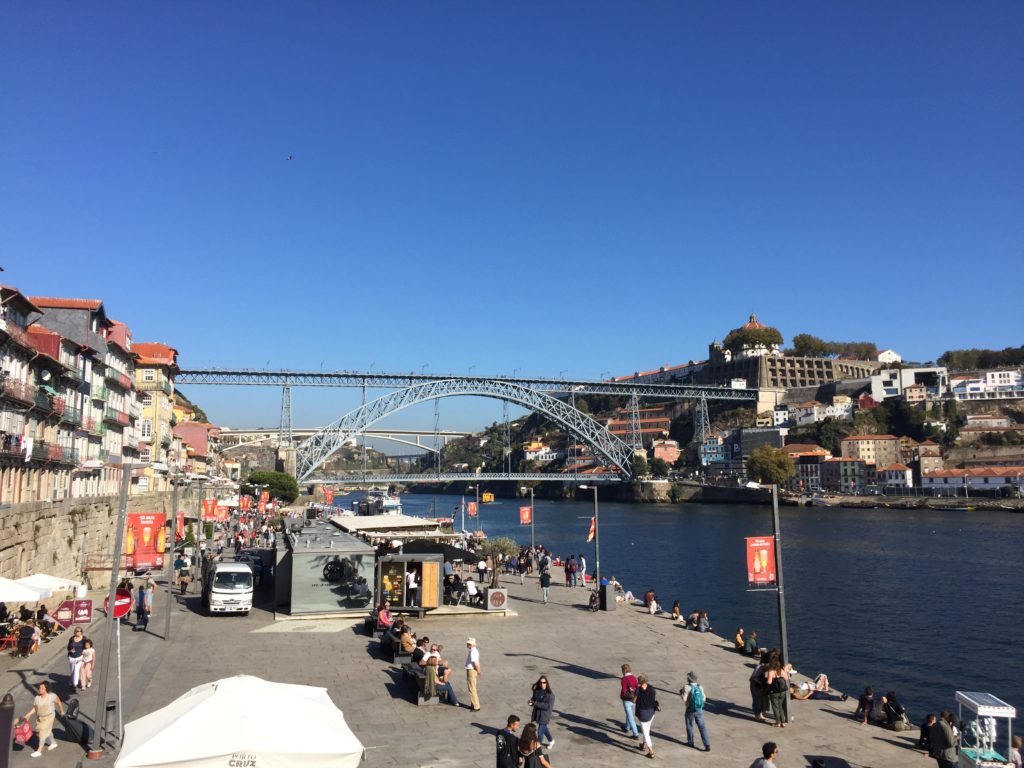 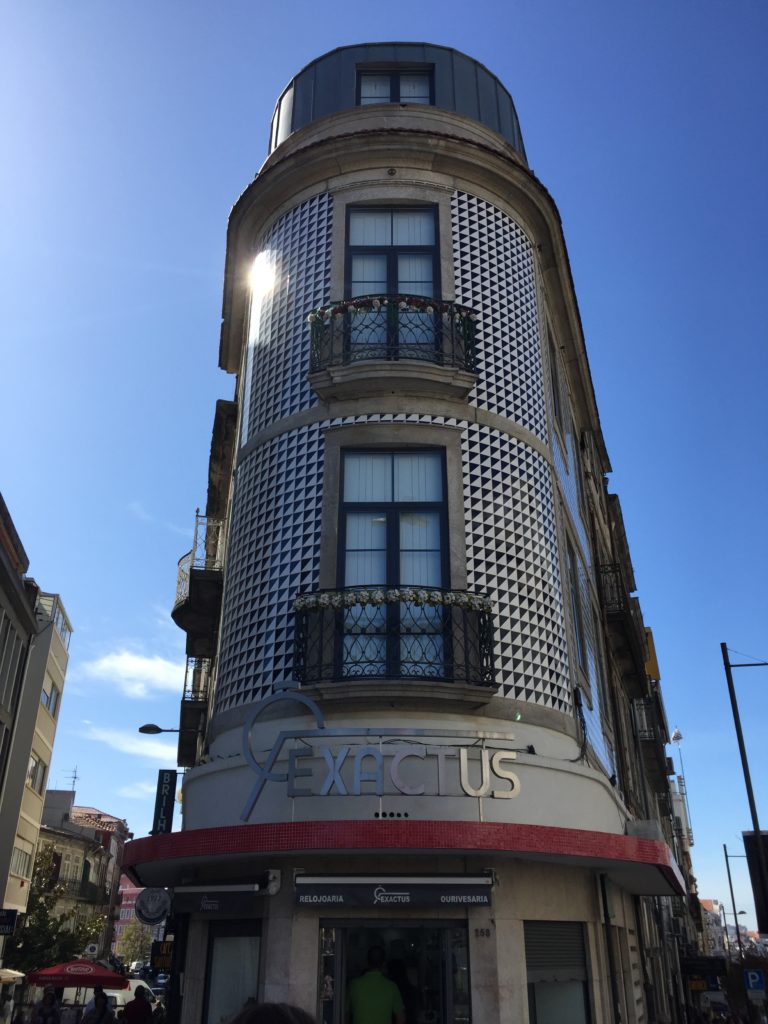 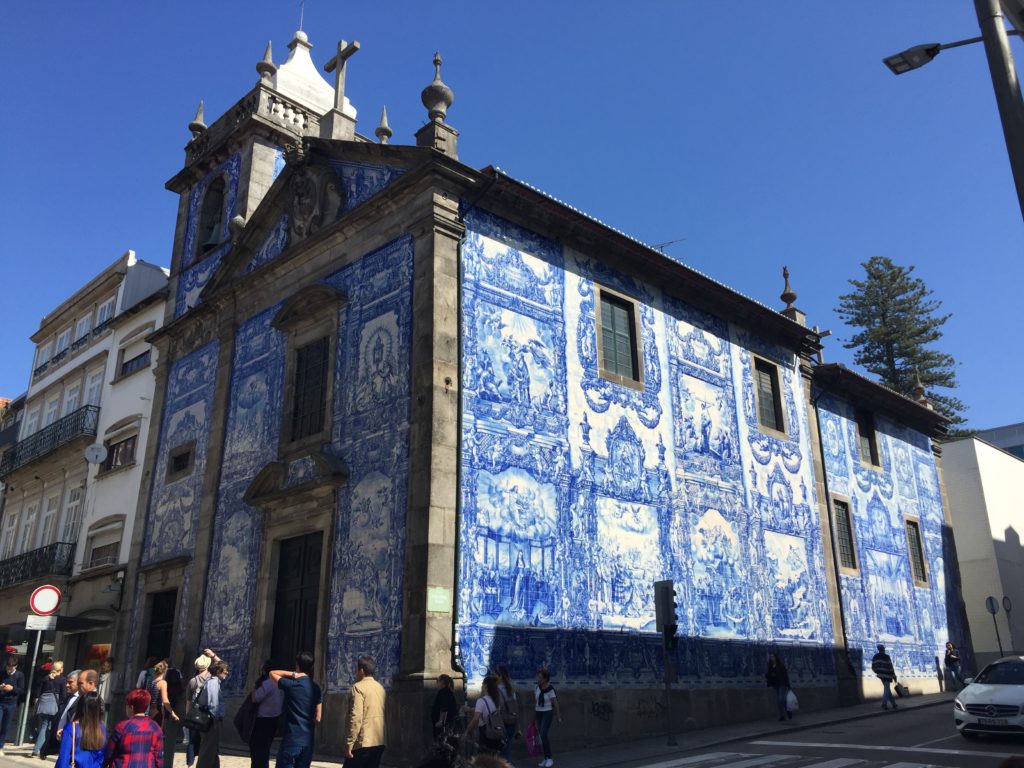 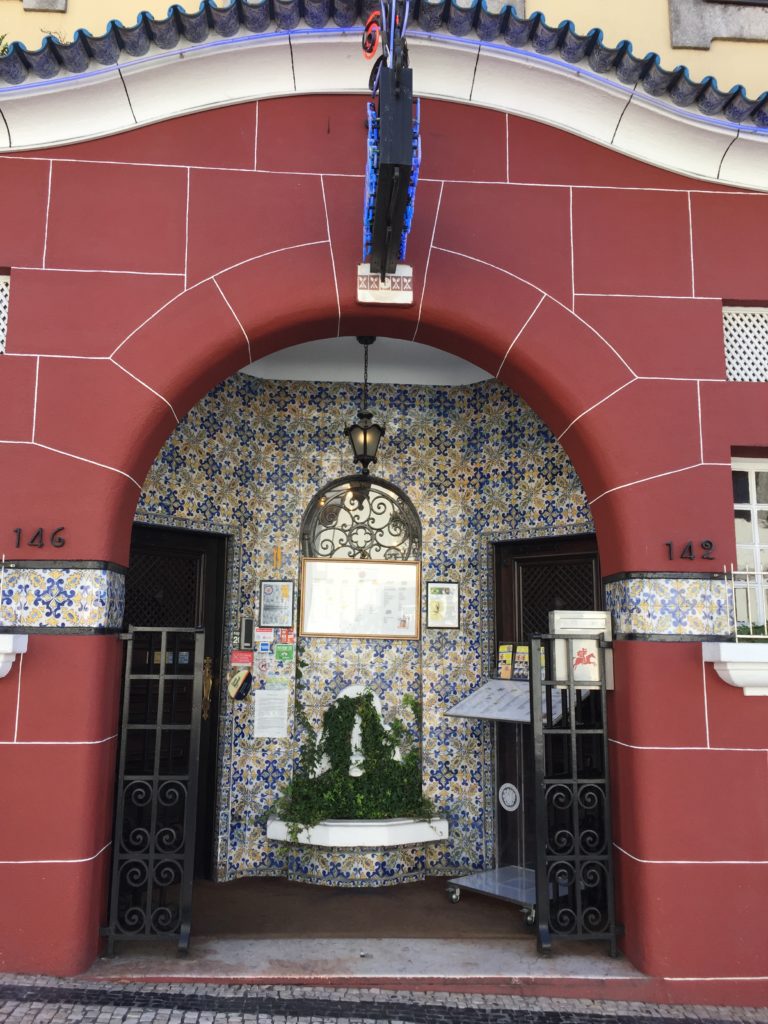 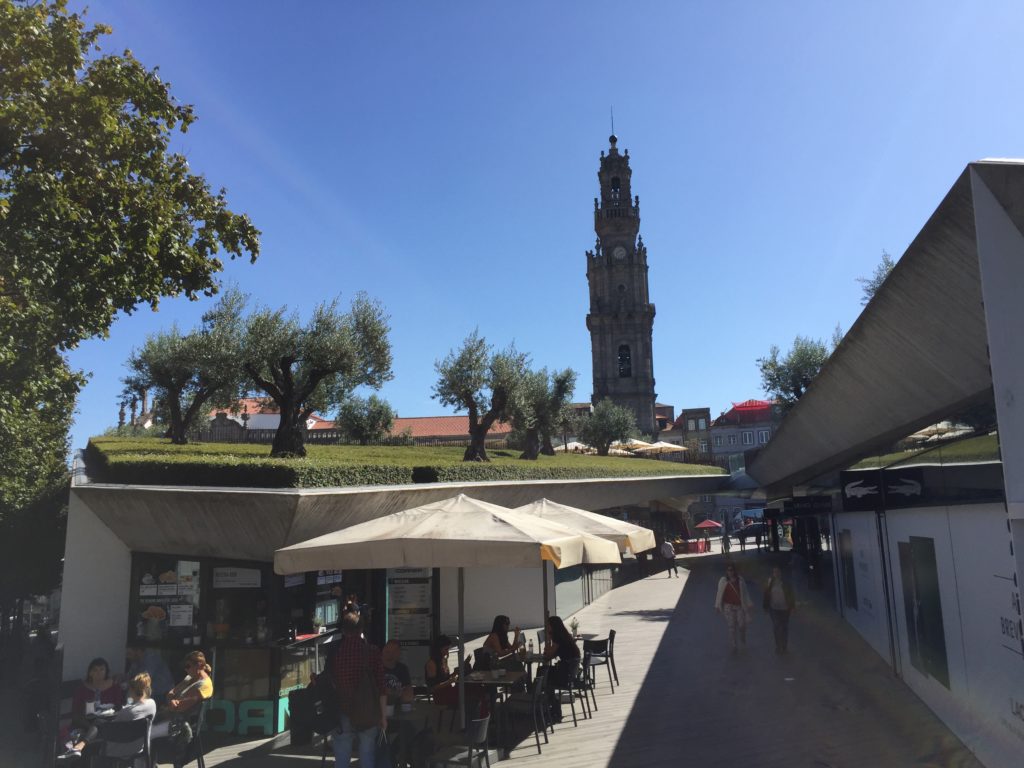 Above, see how the people are below and the ‘grass’ and trees above? Very cool looking. This was right across from the famous library/book store. 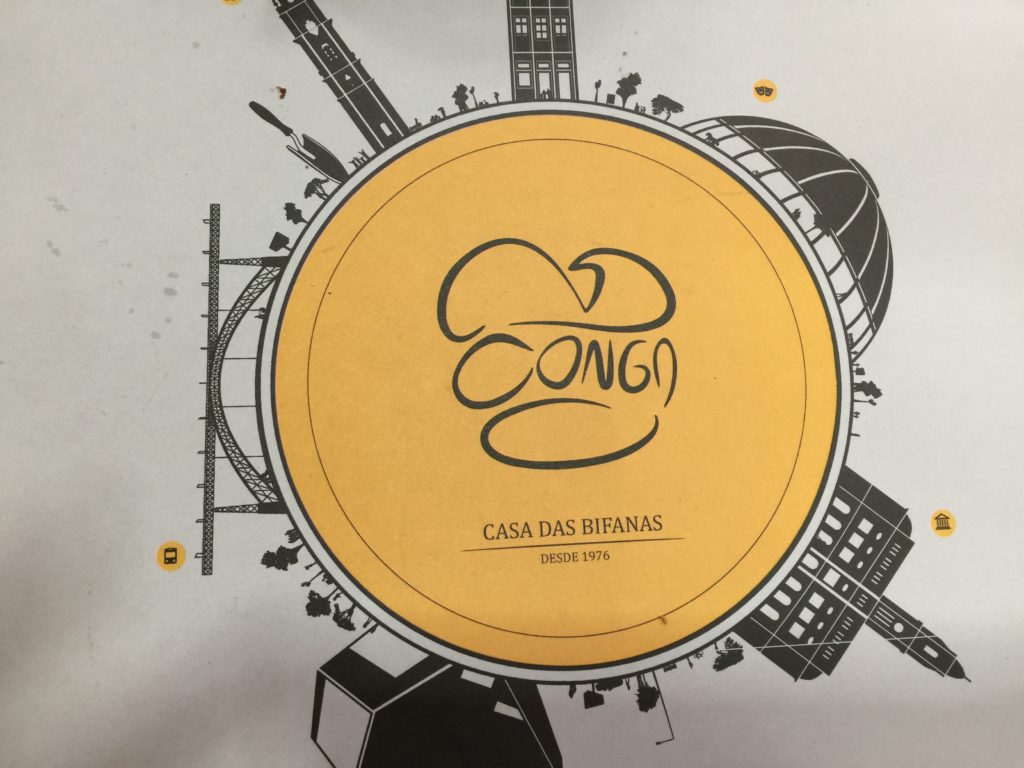 Cool place recommended by our canyoning guide for the famous local sandwich. 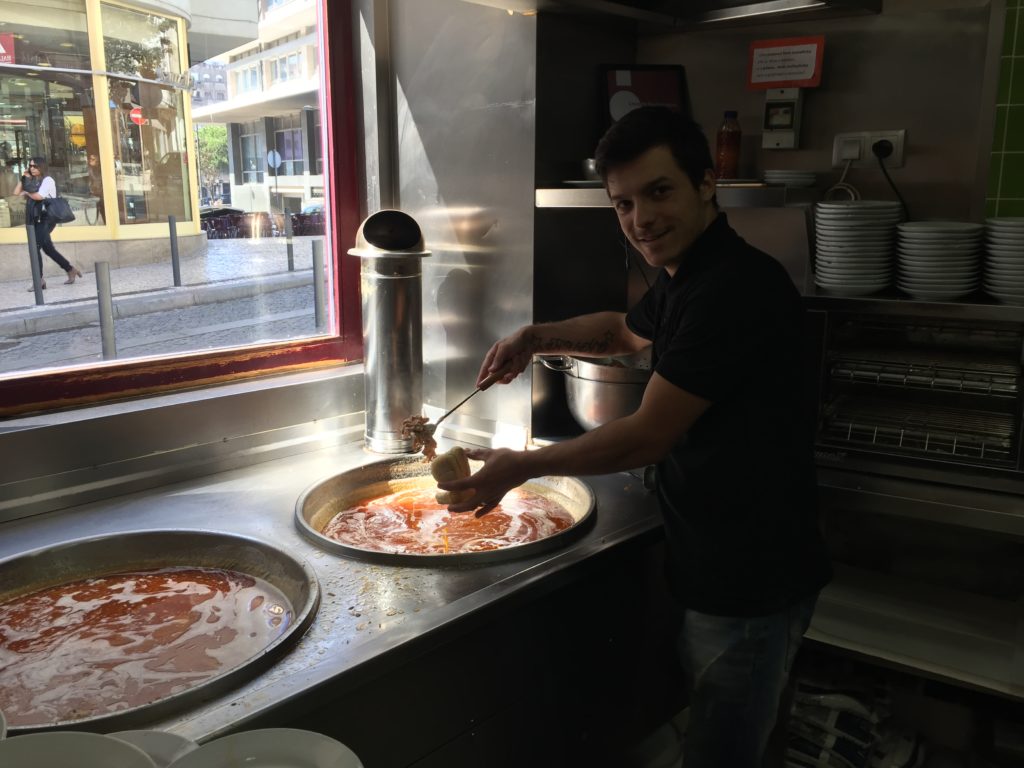 That’s the meat of the sandwich cooking in the broth. It was a little spicy but not too much. SO Delish. 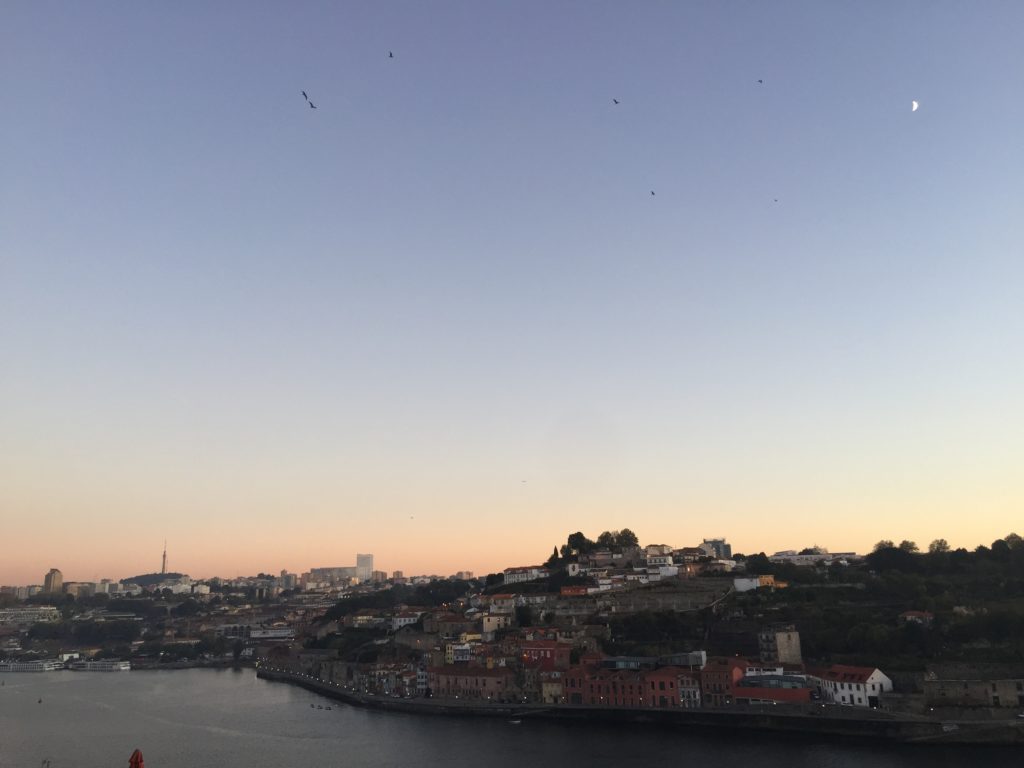 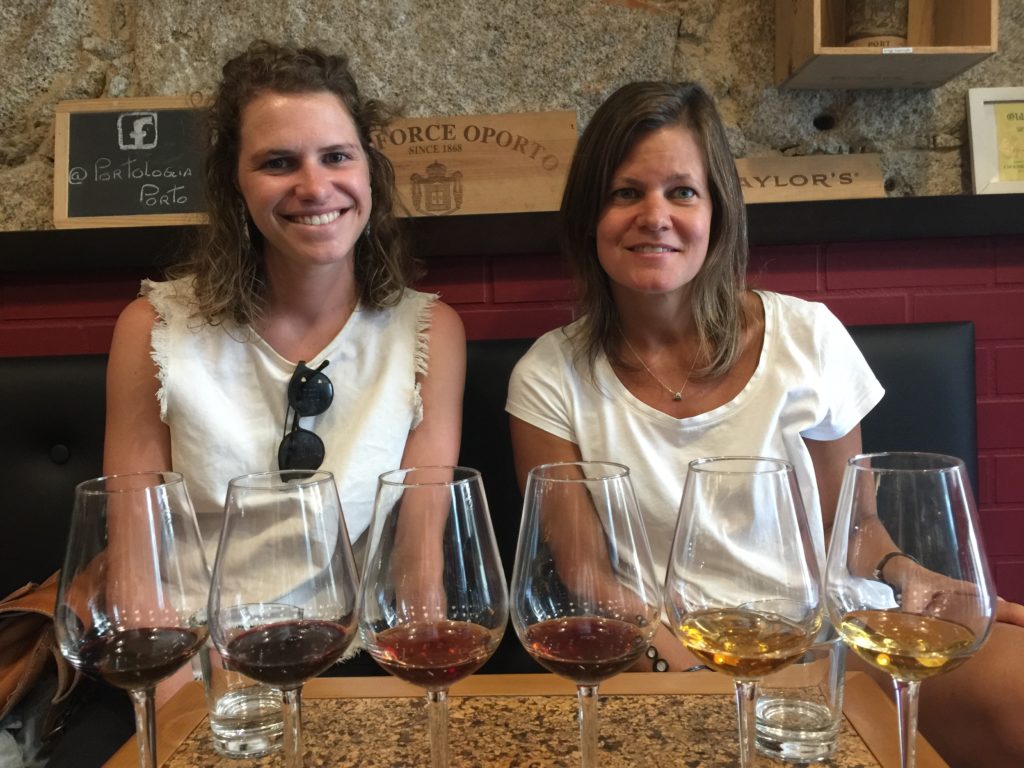 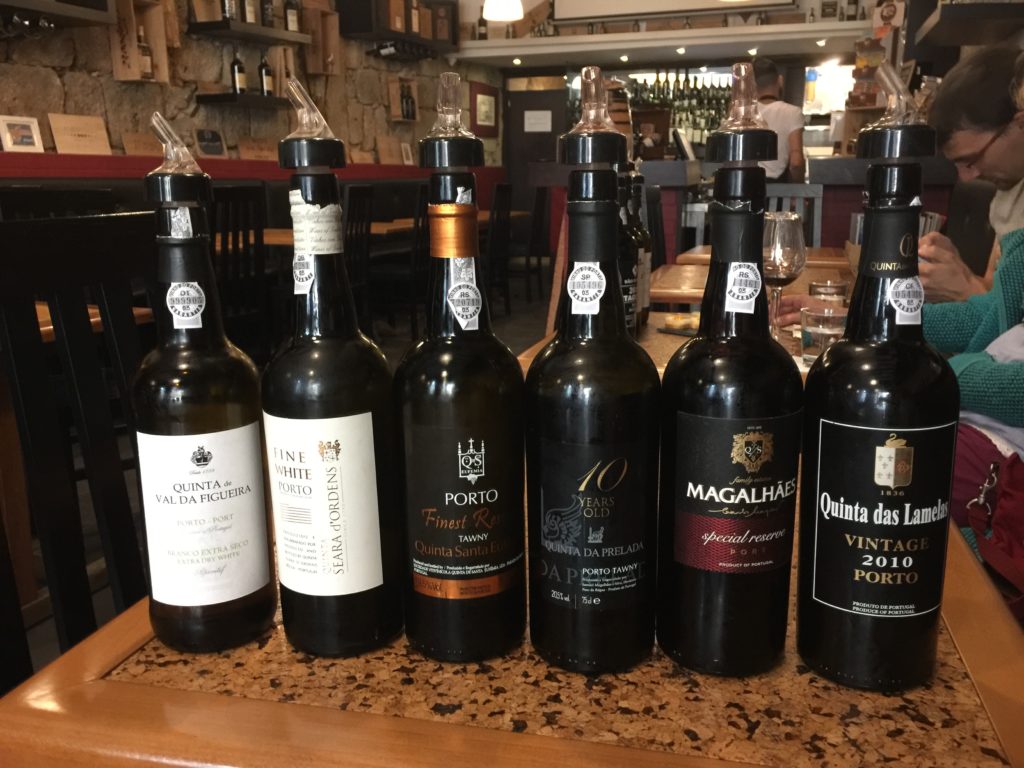 We walked the mile home, exhausted, and got a good night’s rest.

The next day, we had to GO! Off to Santorini for us! YAY!

By the way, check out this crazy bottle cap-thingy. HA! 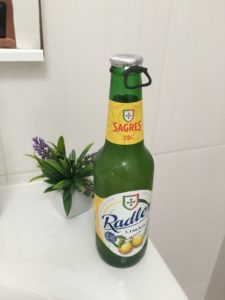 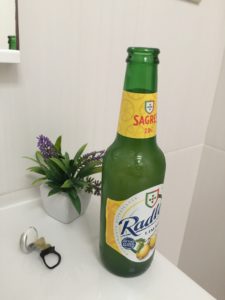