Well, the journey to London was expected to be painless. A short journey from Antwerp to Brussels via a local-type train. Then get the Eurostar to London. Fortunately, we had an early start and caught the earlier train to Brussels, which left us some excess time. We picked up some chocolates in the train station (we never did do that chocolate tour we thought about in Antwerp), and failed to find Laney a new converter/charger (left behind in Amsterdam I think), and headed (rather early) to our train.

Well, thank goodness we went early, because first, it was kinda far – for being inside a train station – like a 10 or 15 minute walk. THEN, well, I hadn’t anticipated plane-type security. There was no line, fortunately, but some threatening posters about knives, etc. And, yes, we have that pocket knife (Swiss Army) from Switzerland, plus a weatherman with a knife that we brought from home. I debated calling it out and offering it up for confiscation, then thought, no, let’s see. Well, it was buried in the big bag, with the skateboard on top, and both were stuffed into a boot, so they probably looked like a block of metal on the X-ray. But they apparently went undetected. Good/Not Good.  Perhaps it/they were not big enough, even if I had called it out, to be a violation. Who knows. I guess that’s the kind of thing people would research if they were only doing a few hops on a holiday. These are the kinds of details we don’t bother with. HA!

The train ride was only a couple hours. Laney and I zoned out mostly. there isn’t too much to see, really. Part of the trip you are underground. Obviously. HA.

Arriving in London we grabbed a taxi (very cool taxi’s in London. Not all were the traditional black cab so I was glad we got one of those). Arrived at our flat and met our hostess Mel. The place was lovely. It was a downstairs flat, like below sidewalk level. We had a bedroom and shared the rest of the house with Mel and her cat, Oscar. Turns out, Oscar’s not really her cat. It had belonged to a neighbour – and was a bit of a shared cat among the people who live on her street (it’s a whole-block building, square in shape, with a courtyard in the middle with a playground, etc. – so the cat probably remains mainly in the courtyard – might have to now that I think about it. I’m not sure there is access to the courtyard except from the houses themselves. hmmm). Anyway, the primary owner had died and another moved away so Mel adopted Oscar, who is quite old. I got the impression Mel wasn’t completely happy with the situation, but felt it somewhat of an obligation. She openly stated that she likes animals but does not want pets. HA.. Oscar is a very friendly cat who loves attention and loves to purr. We were happy to have a furry friend for a while. We miss Bubba. We relaxed a few minutes, not long because we were both hungry! We were in the Notting Hill section of London, which is quite posh, and has lots of good shopping and restaurants. It didn’t take us long to find a nice Thai restaurant. I finally convinced Laney to try Thai (she insists she liked the Asian in Berlin and I told her the dish she had there was Thai, and that not all Thai is spicy). Anyway we had a wonderful meal and then headed to the Tube station to get to Covent Garden. The weather was good and I wanted her to experience that area, and to see any buskers or street performers. I vaguely remember the area being fun for that kind of thing. And I was not disappointed. 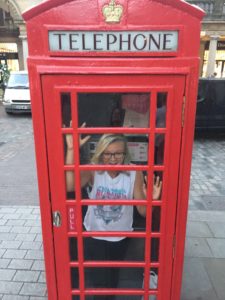 Let’s just say that a street performer finished up a performance and promptly started a new one, and dragged me into it! HA! It was fun, of course. The performance was intended to be a comedy, but the performer never spoke a word, it was all gestures and physical. When he first pulled me from the crowd, he grabbed my hand and lead me off through the large square that the crowd had formed around him. Stopped at the edge of the crowd and waved as though we were leaving. HA. That’s just an example.  Anyway, Laney has the whole thing on video but she’s forbidden to share it. She can show you if you see her. It’s pretty funny. Rather humiliating for me, but funny.

After that, we wandered around a bit, spent some time in the big Apple store there, and then headed home.

The next day we went to Madam Tossaud’s Wax Museum, which was a ton of fun. Very big and quite different from the others we had been to. There was an IMAX type short film and some other ‘ride’ type things. 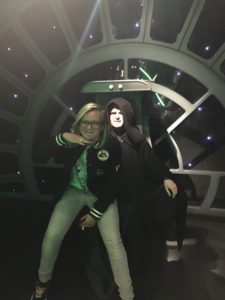 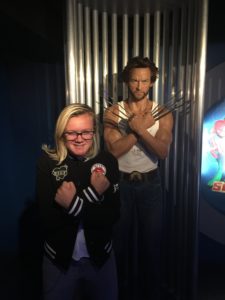 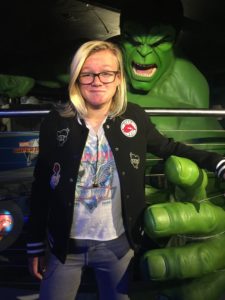 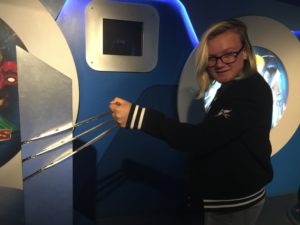 We went home for a bit, then headed out to our dinner before our show, The Woman in Black. Dinner was Thai again (YAY, I’ve turned her to the dark side). We arrived a bit early for the theatre so we had a chance to sit in the bar for a bit. It was a very small place but quite lovely. I had a wine. I think Laney had a water. We had very good seats,  they were called Row C but were actually the second row right in the middle. And there was no one in front of us. I think those seats might have been TOO CLOSE – you could probably touch the stage with your foot from that first row.

The show itself had no intermission, I think due to the suspenseful nature of it, they don’t want to lose the suspense momentum by having a break. It was JUST the kind of show I was looking for. Low ‘production’ – meaning minimal props, it was all about the actors. And there were only 2 that spoke. It was captivating and scary and entertaining. It reminded me of the show I had seen in London years ago called Blood Brothers. Similar, that had few props and few actors but was a great story.

Laney laid her head on my shoulder at one point during the show – I feared she was bored. But later she said she loved it and that her neck was hurting her. YAY.

After that we headed home – we were TIRED.

As usual, we spent some time in the kitchen/living room talking to Mel. She has traveled quite a bit. She was a photographer for documentaries, if I understood and can simplify a bit, so she told us a little about her time in vietnam and Thailand. We also talked about people, relationships, kids. It was nice to be in a place where we had a common language. It’s generally easy to ‘get along’ in a country that speaks a different language, but it can get lonely after a while, Laney and I only having each other to talk to. I enjoyed Mel’s company very much. I hope I get to see her again someday. Laney mentioned maybe coming back to London when she’s older and surprising her. Mel and I exchanged numbers (with Airbnb, you can communicate with your host while you are there, via the app and email and text, but they mask everything and after the stay is over, the communication is ended I believe).

While we were in London, as well, Laney started her school work. Yes, very begrudgingly. But, once she got started on the Kahn Academy, I think it didn’t seem so bad. We worked out a schedule of a certain number of lessons (or whatever you call them) each day. I took out weekends and travel days, so we won’t have to deal with that. And gave her a reprieve on the first research project. We’ll start that in 2 weeks.

The next day, we were to take a train to see my friend Carla, where she lives with her husband and son and daughter, about an hour outside London. Carla is from America, the Boston area. Her husband is from England, which is how she and her family ended up there. Anyway, Laney and I hopped a train but not until mid-day (around 2 I think), as her kids are in school and she was working. Carla picked us up at the train station and we went to her house. Not too long after her kids were home – one guitar lesson later we headed out for a walk to a lovely pub, followed by a walk through a woodsy-park where the kids played hide and seek for a bit. then we walked past a rowing lake and headed home. It was a great time. We ended up spending the night there, since it was late and no reason to trek back to London so late.

Arriving back in London around noon the next day (our train was a bit delayed), we showered and headed out to the South Bank of London. Passing by Big Ben, The London Eye, we visited the London Dungeon. This was similar to the other dungeons we had visited, but, like Madam Tussaud’s, it had a ride and other things the other dungeons didn’t. It was very cool. 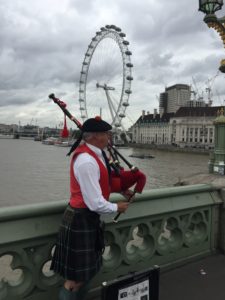 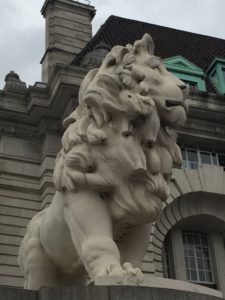 it’s hard to show in a picture but this English 5-pound note has a clear spot on it, I put a receipt behind it. Very strange. 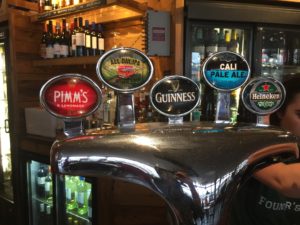 After that, we wandered down the South Bank area, where there is lots to see. We snacked on some empanadas from a street vendor. Came across a cool skate park. Some interesting art/park benches.  A cool pub. We people watched for a while. Laney got some roasted nuts from a street vendor, she says she usually gets them with her Grandpop at Knoebels. Then, we hopped back on the tube to head home. Only we got on the wrong train. It wasn’t a tube at all. It took us WAY out of town. like 45 minutes before it stopped. HA. Well, we got back on another train right away that headed back to London Kings Cross and got (mostly) all fixed up. When we finally exited the Tube at our stop at Notthing Hill, we had some issues, with the non-linear (and perhaps time lapse) of our Oyster (tube/metro) card, but one of the attendees was kind enough to help us out so we got away with our mistake (which could have cost us serious fines for going so far without paying). I don’t feel bad about trying to trick the system in this way because it’s not like I WANTED to go where we ended up. Nor did I get any pleasure from it. HA.

Home again. Time to pack. The next day we head to Inverness!

Overall, London was great. Laney really loved it. I think it was a combination of our great host Mel, and the familiarity of the English language (a relief after so many other countries and languages) and a cool city vibe. For me, it was a bit like coming home. Things were familiar in a way but new, too. I didn’t remember all that much in the way of specifics. Of course, I vaguely pointed out to Laney areas where I had been, lived, etc. But that’s all ancient history. 🙂

One thought on “London – feels familiar!!”