The trip from Amsterdam to Antwerp should have been a direct train of about 3 hours. Instead it was 3 cancelled trains (and 3 transfers) and about 6 hours. AH well.

Arriving in Antwerp I was so pleased with the Airbnb. It was lovely, 2 bedrooms, in a bustling area (but not too busy) and very near the centre (Meir). As usual, we settled in a bit and I went to the store. I was determined to cook some meals, after not being able to cook at all in Amsterdam. I bought some chicken, peppers, onions, some tortillas. I had 2 dinners planned plus some breakfast items. Unfortunately, the only chicken there was frozen so we weren’t going to be cooking that tonight!!

That evening, Laney had pasta. I went out to dinner to a place I had read about in one of the books in the flat. Turns out it was a pretty fancy place! But, you know, once you are ‘there’ well, you’re kinda stuck. It was really nice, though. Some great sample apps came with my dinner. Oysters, fish. The dinner and bread and wine were all great. And, since Laney was home eating pasta, it didn’t break the budget. HA!  I’m terrible, I know.

The next day, Laney wasn’t feeling too well. Headache and a bit of soreness in one of her ear piercings. SO, I was on my own. I was also a little tired so I chilled, worked out, cooked dinner and head out around 3 or 4 for the very ‘interesting’ beer bar I had read about, also online. I think I googled best places for beer in Antwerp. Lucky me, one of the best in town was right up the road. The Kulminator Cafe.

When I walked there, before I even walked in, I could tell this was going to be ‘an experience’. The front windows were full of books and overgrown plants and you couldn’t even SEE inside. In the front small foyer type of area, where stacks of crates full of (I think empty) bottles. Like, you could barely get passed them and I thought they might topple as I passed. 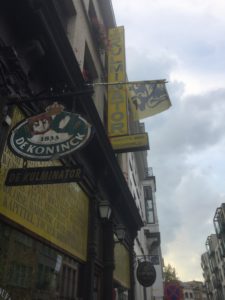 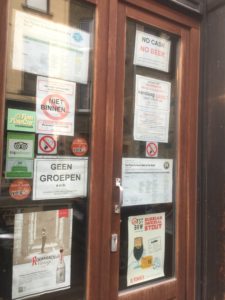 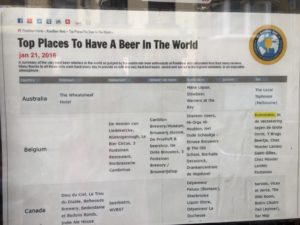 When I walked in, the scene got even more interesting. It was like being in someone’s very cluttered living room. Only one other patron was in the place. I approached the bar counter, and, not knowing if the (Woman) bartender spoke English, I only said Hello and she indicated I should sit down. I found a comfortable spot, and she brought me a beer list. And by list, I mean an entire, 2″ thick BINDER. None of it in English. I perused it for a few minutes, then promptly closed it. HA. When she came around, I asked her if I could do a sample of 4 or 5 beers. She asked me what kind, I asked her to pick. She asked if I like sour beers, I told her I LIKE ALL BEERS! She brought me a great selection. I was in beer heaven! 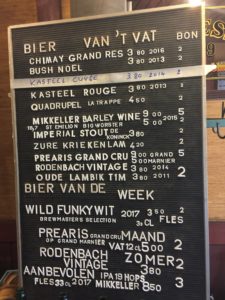 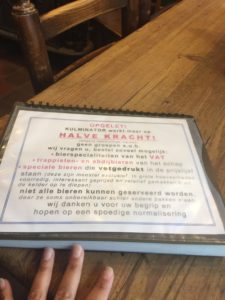 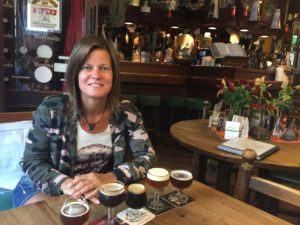 Soon after, I engaged in a conversation with the man nearby. I never got his name but he was from Brazil (and Italy, sort of), and now lives in Antwerp. He recommended a chocolate place (which we never got to), and we talked about his life and travels, as well as ours. He was quite pleasant. A few more people wandered in, my new friend left and I promptly struck up a conversation with a family that had sat down next to me. They were from Madrid. Mother, father, grown son and grown daughter. The mom didn’t speak much English, but the daughter and Dad did. The daughter is currently living in Wales, so her English was very good. The Dad was also pretty good. I had a great conversation with them about travel, and differences between countries. One thing they had a hard time with? Drinking without food. How can you have a beer without some bread and cheese at LEAST! HA. The Kulminator offers no food. Not even pretzels or peanuts. It was great talking to them and enjoying my multiple beers. We left about the same time.

I headed home, and we ate the dinner I had cooked earlier. It was still warm in the oven.  Chicken, sort of like I make at home. And some broccoli. Only, this time, I had to toast bread and crush it to make breadcrumbs. HA. Too much work. And I had to mix oil and vinegar and some salt, pepper and a bit of sugar to make the ‘dressing’ that goes on the chicken.

Some chill time and bed

The next day Laney still wasn’t feeling good, and honestly I wasn’t up for travelling, so instead of getting a train to Brussels or Bruges, I decided to take a walk around the centre (Meir, pronounced, I think, Mayor) of Antwerp. On my way there I stumbled across a ‘Street Food Warehouse’ type of thing. Similar to where we went in Copenhagen. It was a very big place with lots of cool places to eat. I ordered a mixed platter of middle eastern food then settled at the bar with a beer until they brought it over. The bar had these HUGE tanks behind it, holding the beer. The whole place was pretty cool looking. The pictures didn’t turn out nearly as well, but the food was very good. 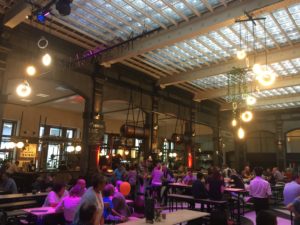 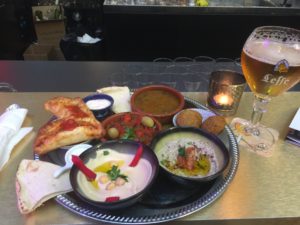 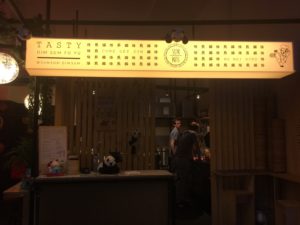 I thought this was a cute name for the Asian place. HA

When I got to the centre (Meir), it was clear there was some kind of celebration going on. That made sense to me, since Ellena (Spanish daughter from the day before) had mentioned a parade that was going on.  At the time, she didn’t know what it was about, but I guessed it might be the celebration of Antwerp being freed from German occupation at the end of WWII (based on the date, it was a pure guess) -I was right. There were US and UK and Polish (I think) and other military vehicles all around, as well as many men in uniform. A few looked old enough to have been there themselves. It was very moving, as I have experienced before, the gratitude and recognition of the American contribution to the war. 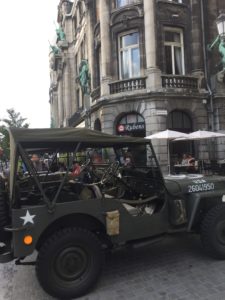 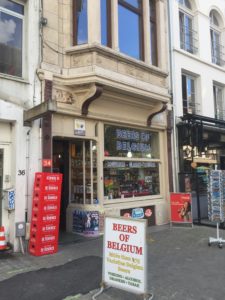 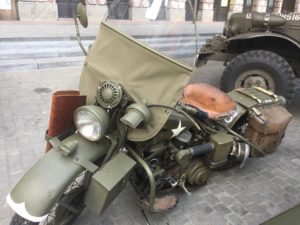 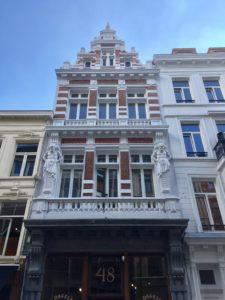 Saw this beautiful building on my walk home.

I wandered a bit, saw a castle, some beautiful churches, lots of cool shops, then headed toward home. Of course, by way of the Kulminator. 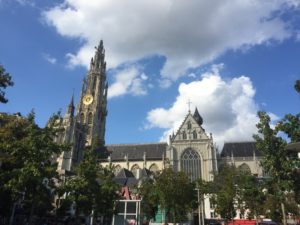 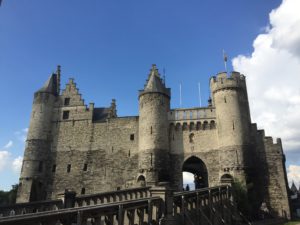 This time, being a Saturday instead of a Sunday, the place was PACKED. I couldn’t find a seat. And I had to wait FOREVER for the lovely bartender to free up. She was so cute. At one point, someone tried to get her ‘ahead’ of me and she pointed at me and indicated I was first. HA. So sweet. I had told her I would be back and she remembered. Anyway, I got my beer and, after struggling to find a seat, a nice guy mentioned that he and his sister and some others were ‘in the back (the outside seating) behind the huge stack of beer boxes’. HA. I made my way back there (it didn’t look like it was intended for public use, but it was), and it was so quaint. Seating was in a square. Probably enough to seat 10-12 in a cozy way. And a couple barrels for tables, and lots of old candle drippings on the candelabra. Oh, and cases of beer that looked like they might topple onto us at any moment. HA. There were 5 of them. Mostly younger than me I think, but not by too much. They were very welcoming. Two from Switzerland (originally from the states) and 2 from the San Fran area, and one world wanderer. A chef, doing perpetual travel (no end date in sight), and working or volunteering as a chef at unique places. Very interesting group. Oh, and at least one of them worked in the beer industry. At least 3 of them were real beer experts (from my perspective). They were happy to share their thoughts and we exchanged tastes of different (some expensive) beers. Very cool. 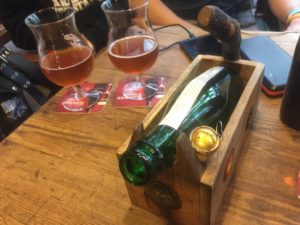 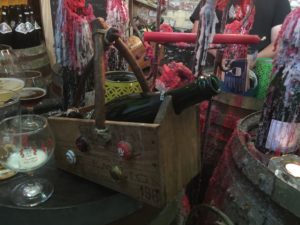 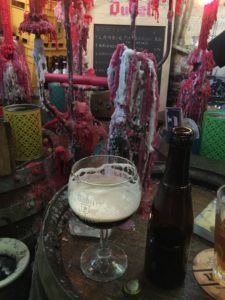 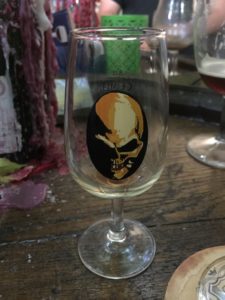 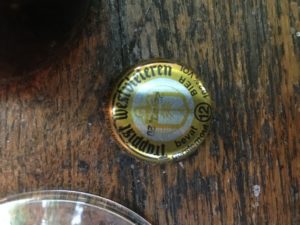 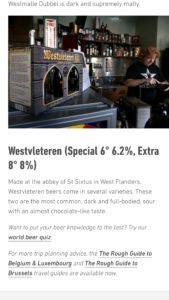 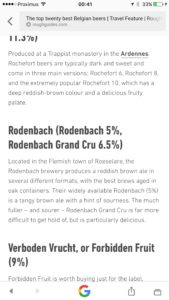 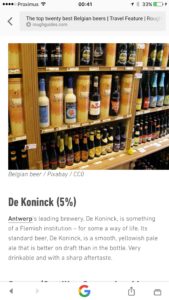 These (or some version of these) are some of the beers that I tried while at Kulminator. Loved them.

After that, I headed home, made dinner and chilled with Laney.

The next day, I did NOTHING. I wasn’t feeling well, so after a workout and a shower, I got dressed. Then changed back into my PJ’s and only left the house later for some fruit and juice. 🙂 I think I got a touch of what was affecting Laney.

The following day, it was time to go. Off to London for us (Via Brussels).