I think I’m getting used to this! Ha!

We arrive in the Munich train station and THEN I look up how to get to our Airbnb. Cell service, like in Iceland and Switzerland, is spotty. And always very slow. I manage to get the walking directions and, with a quick bit of help from a Chilean couple drinking beer at a nearby bodega, we find our way and Check in to our room. It’s small but perfect. The bed seems comfy. Win!!

Becky and Kaitlyn are already here so we do some quick unpacking and meet them in the lobby. We then make our way to Marienplatz to meet Matt and Max and Fifi (the director of the tour Matt and Max are on). 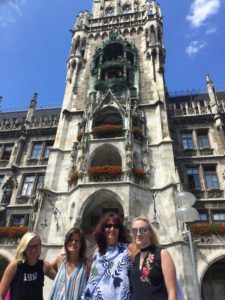 Becky, Kaitlyn and Laney head off in one direction.  Matt, Max and I head toward the bus to a small nearby town for a friendly soccer game. While the team ‘suits up’ and warms up, Matt and I take a stroll. We pass the local brewery and stumble upon a biergarten. We stop for a  wonderful beer under the trees and catch up on the last 10 days since Matt left. After a while we head to the game. America wins!  Must be I’m good luck. Lol.

The local team hosts a dinner for everyone in their beautiful facilities that include a kitchen/bar, an indoor/outdoor space with removable/collapsible curtains, lots of tables and chairs which are mostly carried outside so we can all enjoy the beautiful weather.

The food, of course, is amazing!! Pork cutlets fried on a gas stove outside. German potato salad (OMG So Good), green salad, and other wonderful dishes.  Of course, I feel the need to try to determine the recipe for the potato salad. I am mostly successful. Lol. At one point one of the German soccer players helps translate. And what he can’t translate the cook brings to me. I taste it. It’s vinegar. Lol. Mission accomplished!!

After dinner we take the bus back to the soccer teams hotel and I Uber back to my hotel. It’s a tough good bye for Matt and I. It will be at least a few months before we are together again.

Becky, Kaitlyn, Laney and I crash. (We now call ourselves the Tripsters. Because we are not only taking a trip together but there have been a few tripping incidents – yikes!!).

In the morning, Laney and I joined a bicycle tour of Munich. We learned a lot about the different architecture in Munich which is heavily influenced by Italian and Greek architecture because the rulers at the time liked Italian and had a brother who was the leader in Greece.

The highlights of our bike tour included the biergarten in the English Garden ( so named because it is supposed to be styled like an English Garden – meaning somewhat groomed but very natural looking. Not ‘landscaped’ per se. )

Another highlight was the river surfers also in the English Garden. I haven’t been successful posting videos here but here are some pictures. 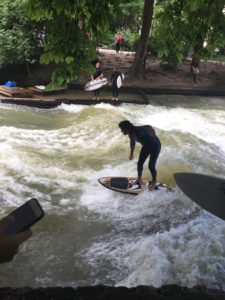 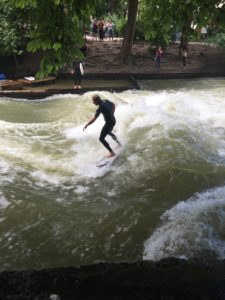 We learned a few other things on the tour. Like bicycles have the right of way above all others in Munich, at least. I can’t confirm but it seemed the same in Berlin.  Also there is a bike lane portion of the sidewalk. Laney had to keep reminding me not to walk in it. They will RUN YOU OVER in that lane. And curse you out too. Lol. Stupid American. Yes I know. Lol.

We learned that Munich was the last city in Germany to make its universities free. Also there is only dorm space for 1 or 2% if students. The rest need to get apartments in the city which is obviously quite expensive.

We also learned  that a biergarten was created from the necessity of burying beer under a chestnut tree to keep it cold. This was needed because, at some point, it was no longer legal to brew beer in the summer because it caused too many fires. So the beer had to be preserved and people preserved it under a chestnut tree which has wide but not deep roots so was ideal for his storage. In fact, in order to call a space a biergarten you must have at least one chestnut tree. 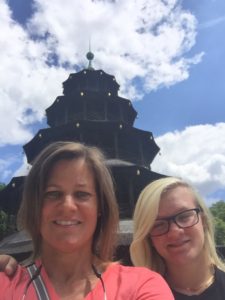 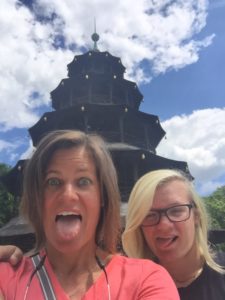 We also learned that refrigeration was originally invented for beer! It was later that we decided to put less important things in there. Lol.

Our tour guide mentioned a cat cafe in the university area. Of course Laney wanted to go. 🙂

After the bike tour, the Tripsters head out to check out the sites. We hit the Marienplatz and Karlsplatz. Some shops where Laney bought a watch and some sunglasses. 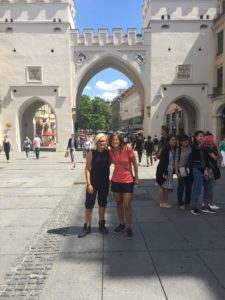 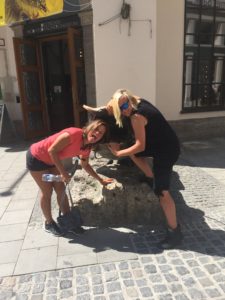 A highlight of the day was a stop at the Fraunenkirke  – the ladies church. Where we lit a candle for Doris and Dot. Our moms who were best friends from high school and who both recently passed. We all know how happy they would be that we are continuing another generation of friendship and thrilled with this trip specifically. We all feel them with us, every moment of this trip.

Towards evening we stopped at the Cat Cafe and saw some pretty kitties. The girls had dessert. Yes, before dinner. 😊 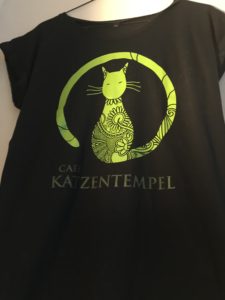 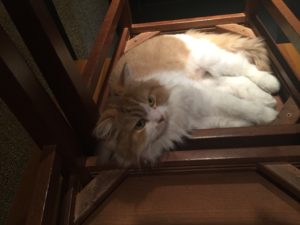 After that we headed back to the biergarten for a German feast. Laney and Kaitlyn both learned they like the Radler beer which is like beer mixed with lemonade. It’s a low alcohol, sweet beer created specifically for cyclists because drunk driving a bicycle is illegal in Germany. 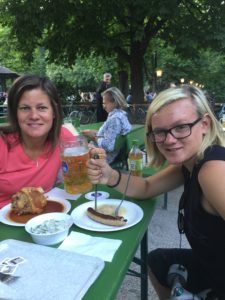 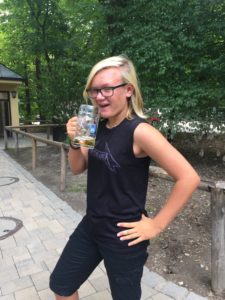 Back home to bed. The next day we decided to head out to BMW Welt (world), which was really cool. Lots of cool cars and motorcycles. We picked up our ‘ride’ for the next few days. A BMW M series X6. 8 cylinders. WHOO hoo. Autobahn!

Becky drove us back to our apartment and we had some struggles to park the car, it being slightly larger than the average car in Europe. Kaitlyn in particular had trouble getting out of the car. It was hilarious.

After that we all changed into some nicer clothes (I wore my wedges, Abby) and had dinner in the back garden of Zum Dürnbräu, which is a bit hidden in an alley not far from Marienplatz, in the direction of, and past the toy museum.

The next day we were up and out by 9 am to drive to Berlin.

The drive was great. My first experience on the Autobahn. If you’re interested check out my post on THAT. 😊 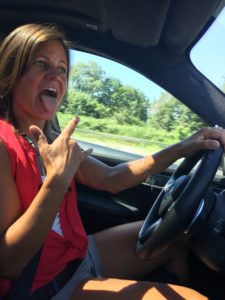 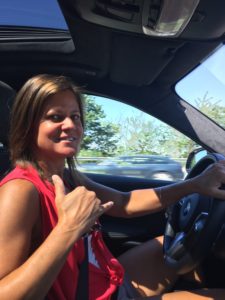 Our first day in Berlin Laney was anxious to get to the Black River Store. Which is a fingerboarding store. We got there a little early around 11 and tho it was supposed to open at 12 we ended up waiting until almost 1245. Laney will tell you it was all worth it. Laney spent all day there. Until nearly 6 pm.

I found a nearby cafe and spent the hours booking some train tickets for our August destinations. Once that was done I had a walkabout and found the coolest ‘restaurant row’ type of place. It was two city blocks with awnings that basically touched each other creating a continuous eating and drinking area. ALL THE FOODS. Asian. Mexican. German. Italian. More Asian. We had Asian and it was amazing. People around us asked us what we ordered because they thought it looked good.

On our way home it started to pour so we ducked into a cafe and Laney had some AMAZING apple cake . Win! Again!

We learned about some of the famous street artists in Berlin and the difference between graffiti and street art. Know what it is?  The purpose of the object painted. If it’s purpose is to promote the name of the artist and/or their group its graffiti. It’s the purpose is to portray a statement or something interesting/thought provoking/beautiful it’s street art. Cool right? Here are some examples of street art that we saw: 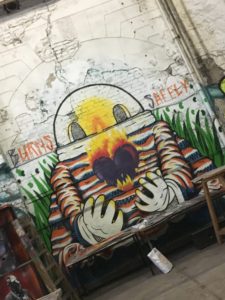 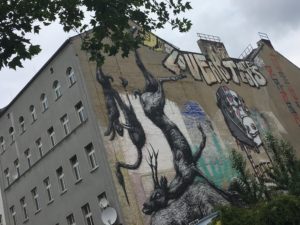 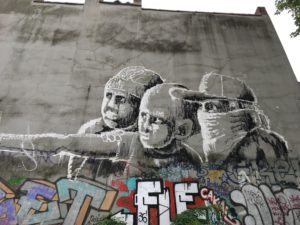 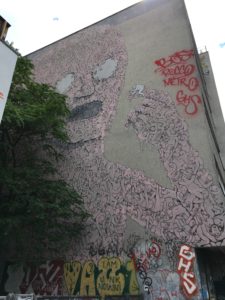 We also learned that some street artists are paid. And one artist, who took many weeks to create some street art on some buildings in Berlin, later came back and painted over their own art in black when they heard the adjoining property had been sold and the developer was planning to enclose the artwork for only the residents of that property to see. You see, the idea of street art is that the artist believe people should not have to pay to see art. They want their work to be accessible for ALL to see, and so this developer was violating the whole reason for doing street art. SO, the artist took it away. Cool, right?

After the tour we went to a warehouse and created our own street art! It was really fun and I learned a lot about how to paint with spray paint!! 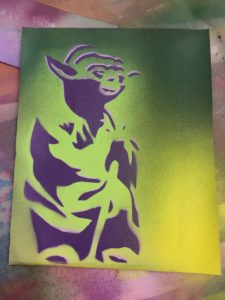 After that we walked around Berlin. Saw some bears. And the Brandenburg Gate. 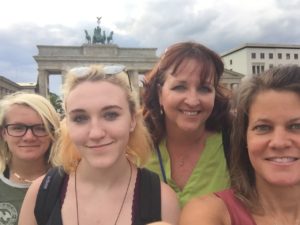 We had some good Mexican food for dinner. After dinner we decided to walk home (Becky thought it didn’t look to far to the needle TV tower at Alexanderplatz, haha)   It was a nice walk. We ended up (accidentally) by the river (Spree, I think) where there were tons of chairs set up and people were sitting and having drinks and listening to music. I wanted to stop but we were just so tired and worn out from the day!! Another time, Berlin. 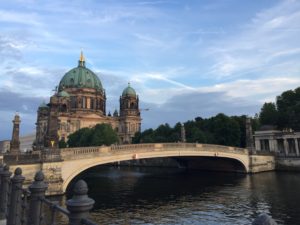 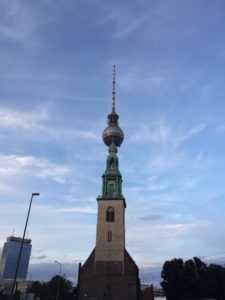 We took these pictures at the Checkpoint Charlie museum. I think this may be our HDWW ‘logo’.  LOL 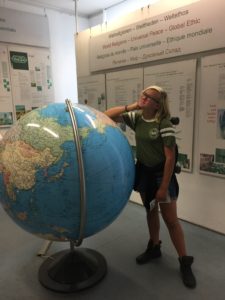 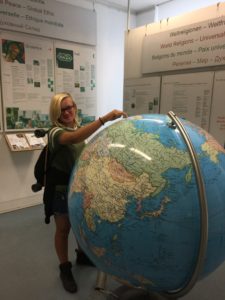 The next morning, drive to Salzburg.  Yay!!