Skip to content
After a few hops, which don’t seem as painful as they once were, HA, we arrived in Copenhagen!
First we flew from Gdansk, Poland to Malmo, Sweden. Then we took a bus to the Malmo Central Station, then we grabbed a bite to eat (we had an hour) and then took a train to the Copenhagen Central Station. Then after a brief wait (our room wasn’t ready yet, we were early) we took a taxi to our room. A couple months ago, this would have seemed like torture. Now, it seems, we almost revel in the challenge, and treasure the down-time  – either at a station (hopefully with wifi, or good food) or on the train.
At the Malmo train station, we grabbed some food. I got a salad at a salad bar at a grocery-store type place. Great salad. Even though it was 9am. HA. When you get up at 2 that’s lunch time. Anyway, I loved this. The lid for the salad had a perfect little spot for the dressing tub. Kind of reminds me of Switzerland. Everything ‘just so’. 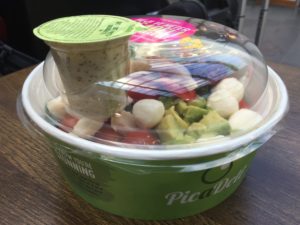 Yes, I’m overly amused by the little things. HA
Our hosts met us as we exited our taxi on the street in front of the apartment building. Such a typical Nordic-looking couple. Can I say that? Tall. Blond. Attractive. Emma (23) and Anders (27) were moving out of their apartment, into Emma’s Dad’s, for the 4 nights we would be there, Sunday to Thursday. This is the first Airbnb that we have been to that meets the original intent of Airbnb.(at least, what I think the original intent was) I think it was intended to allow you to rent out your own home, when you are away. In this case, Emma and Anders basically have a certain amount of money they consider ‘worthwhile’ to move out. They make some money, in exchange for some effort and some inconvenience. Pretty good deal. I mean, if you have a neat/clean house, and someone would pay you $2k for the week (say in OC, during the summer) might be worth it, right? Especially if you have somewhere else to stay. 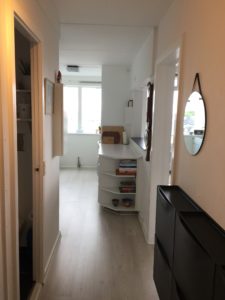 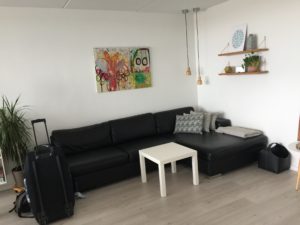 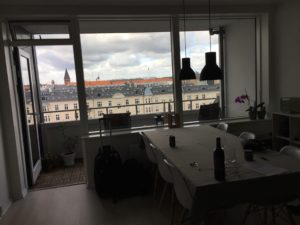 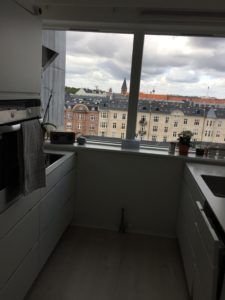 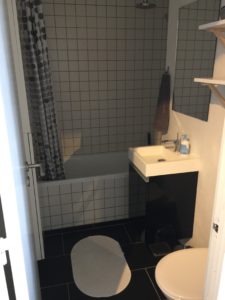 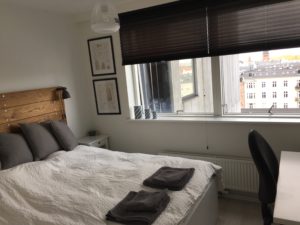 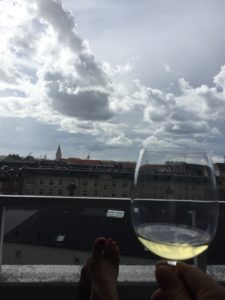 The place is gorgeous! It’s on the 7th floor (with a lift, or I would NOT have rented it – HA) with views over the rooftops of the places around it. A great terrace for drinking coffee and wine. This has become an important criteria for me in looking for Airbnb’s. I find it adds SO MUCH to the experience. Allows me to be ‘out’ without ‘going out’, which is great for those ‘rest’ days, which there are a lot of. Plus all that in-between time, and some place to ‘phone home’ from when I’m talking to Dad or friends. I keep meaning to suggest to Airbnb that they have a ‘filter’ for that. So I can find the ones that have a terrace instead of looking through reviews or messaging the host. (DONE)
ANYWAY. We have a beautiful place. Time for the usual routine. Laney chills from the stresses of travel (HA) and I head out to find the essentials. It’s become the same almost everywhere. I check to see what we have, then buy what we don’t. Sugar. Coffee. Salt. Fruit (raspberries, mango, peaches, strawberries, whatever looks good or is available). A green vegetable (usually broccoli or zucchini), eggs, cheese, milk, Nesquick (Ha, or something like it. Milk in Europe has an unusual aftertaste), wine, maybe crackers or bread. Sometimes pasta for Laney. Butter or oil to cook with if there isn’t any. This will get us through a couple breakfasts, and snacks.
This time, the place is right next door. I thought about doing a walkabout, but I was tired and Laney was STARVING so I headed straight home to cook her some pasta. A little later, I headed out to go have some dinner. It was my first attempt at the public transportation system in Copenhagen. It’s the same in every city, I pick one primary mode of transportation, learn it, and try to stick with it. Depending what’s closest. In this case, the 1A bus line. Turns out, I can get almost anywhere with this. Supposedly I can buy a ticket on the bus, but this proves challenging a few times. It all works out, but not without some glitches. This evening, I end up going to a few places near the downtown centre of Copenhagen. Drinks and snacks mostly. I scope out a dinner place our hosts recommended – called Cocks and Cows. No, I’m not kidding. That’s what’s on the bathroom doors too. Are you a Cock or are you a Cow? I’m not sure I want to be considered either! HA! Is there a non-gender-specific bathroom for me please? HA.
A good night sleep that night and we are off on our first day in Copenhagen. I figure Laney has had enough of ‘sightseeing’ so I follow our hosts suggestion and check out Tivoli Gardens. It’s an amusement park, behind the main train station. Hmm. Sounds interesting, but is their idea of an amusement park the same as mine? YUP. Lots of rides. Cotton Candy. Ice Cream. Carnival games. Laney and I have a great afternoon. It wasn’t very crowded at all. Even the biggest, most popular, rides only have a 7 minute wait. This is my kind of place. It’s small. Kind of crammed together. What you might expect considering it’s in a city and real estate is probably expensive. I like it that way, though. No need for a map, no risk of getting lost. And not so much walking!! Took some convincing to get Laney on the big Daemon roller coaster and the swing-thing. It goes up really high! Ironically, she was the one hesitant to go, but I found once I was up there, I had a little nausea. HA. I think it was from trying to see too much from that height. My head whipping back and forth. HA.  Laney liked it too. She said it reminded her a bit of Knoebels, where she goes with her Dad’s family every July/August. She missed it this year, sadly, so I was glad she got something similar. Of course, Knoebels is MUCH BIGGER. HA. But she says is smells kind of the same. Like cotton candy, maybe 🙂 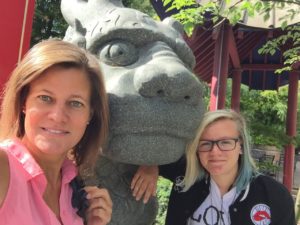 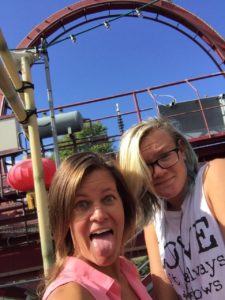 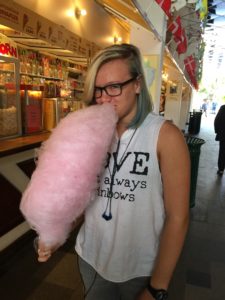 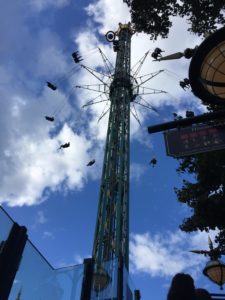 Anyway, after we hit all the top rides, and played a few games, we went to dinner at Cocks and Cows. Their specialty is burgers, and I can see why! WOW. I think mine was called Brazil. Spicy with fried mozzarella. YUM. Laney had a classic burger. Then, we decided to go back for one more run on the Daemon.  When we left,  as happens a lot there in summer, we were hit by a rain shower. My experience is that every evening, in spurts of about 7-10 minutes, it pours, then the sun comes out again. Laney noticed that on one side of a ‘tunnel’ in the park, it was raining, but not on the other. HA. We decided to head back to the park even though it was raining. It was only drizzling. We got on the Daemon roller coaster, and as the ride started, so did the RAIN. I thought it was going to hurt, like waterskiing in the rain, but it didn’t. We did get wet, though. HA. We gave away the points we had earned playing the carnival games. Had another cotton candy, and headed home. Via the 1A bus. Again. HA.
The next day, I tried ordering the bus tickets online, but delivery to my phone failed. I called the company. After a few attempts, we had to give up but they gladly refunded my money.
Laney and I had a chill day. Almost didn’t leave the flat at all. I did some blogging, some planning of the next phases of our trip (Porto, Barcelona, Greece, Prague). I didn’t nearly get it all done, but made some good progress. Sat on the terrace with a beer and some music. That was the best part of the day. HA. Talked to a couple people from home. Then stepped out to get a pizza and brought it home, along with some more groceries. Laney and I watched a movie. The Circle. It was like being home, but not. HA.
With our chill day, we now had 2 things we wanted to do the next day. Laney wanted to see a park called ‘the Red Park’. And I wanted to see the Nyhaven canal area, and eat at the Street Food Market, which was recommended by our hosts. Instead of dealing with sometimes surly bus drivers, I decided to try one last effort and got the DOT app, and bought us 24 hour tickets through that. This time it worked. Much easier. HA.
We went to the red park first, it wasn’t quite what we expected, but still pretty cool. Some skateboard areas, some fitness areas, some chill areas. Then we headed home for a bit. 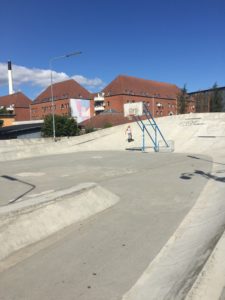 This (above) was a cool combination you would never see in the US. It’s a skate park area, AND a basketball area, plus nets for street hockey. I’m thinking whoever gets there first gets their choice! 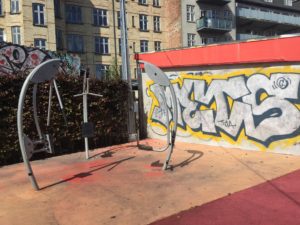 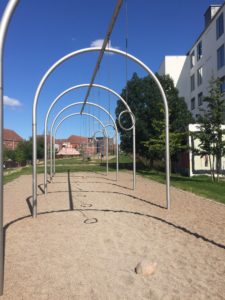 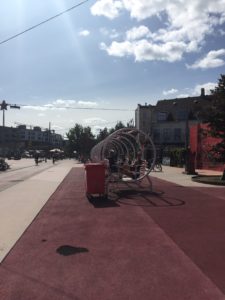 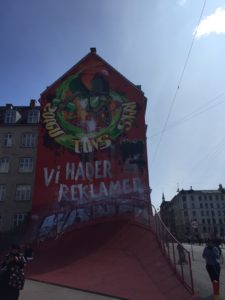 After a while, and a chat with a friend, we headed back out again to Nyhaven for a drink and a walk. I think Laney is hooked on Mojitos. They were very good and we sat by the water drinking them and just absorbing the scene, the people, the buildings.
Nyhaven was beautiful. 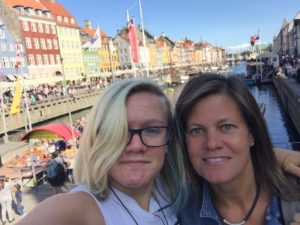 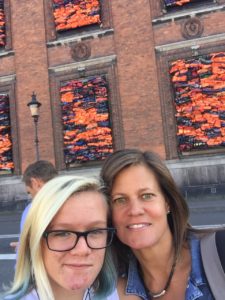 The building was fully stuffed with…. LIFE JACKETS. Crazy but cool. 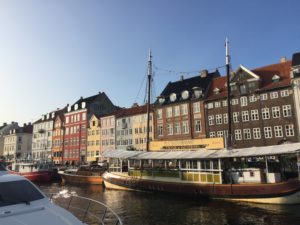 Then we took a stroll along the canal to the Christiania area, then to the Street Food place, which is a bit like Reading Terminal in Philadelphia. Lots of different foods and drinks in a warehouse type of building. Only the variety of foods was insane!!  I had Moroccan. Flatbread with chicken, tzakiki sauce, hummus and salad. And a Bombay Pale Ale. There was Thai, Chinese, Italian, Indian, Turkish, BBQ, Fish and Chips, and many other kinds of food to choose from. It was a hard choice, but our hosts has been spot-on with the pizza place, so I went with their suggestion on the place called Marakesh. SO good. You could see them cooking in front of you. The woman was flattening the ‘bread’, which looked like dough, then fried on the grill, next to that a big frying pan of chicken, vegetables and spices was cooking in batches. YUM!! 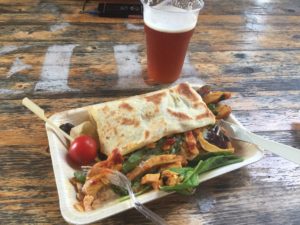 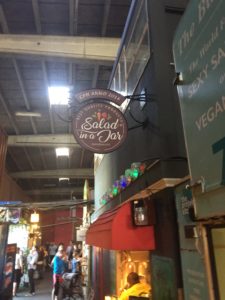 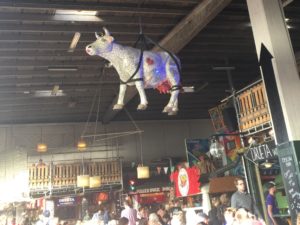 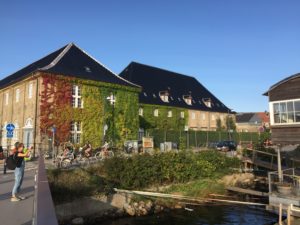 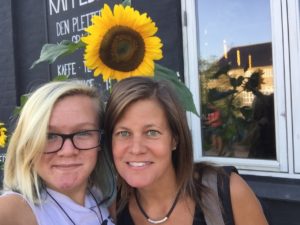 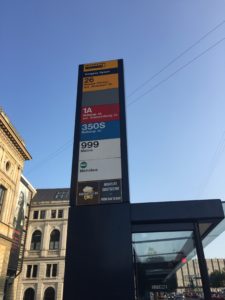 Above, this sign at the bus stop (1A of course) advertises a drinking bus?
We definitely enjoyed Copenhagen. Being there only 4 nights I think we felt it was a little short. Many places we are there 5 nights, and in Poland it was like 11 or something crazy. But we were happy with what we got. HA. One thing I can say,  the weather (aside from quick showers) in Copenhagen was perfect. The kind of dry cool air that you are a bit chilly in the shade but a little hot in the sun.
A few random pictures from around Copenhagen 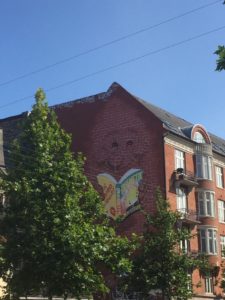 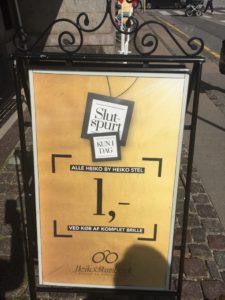 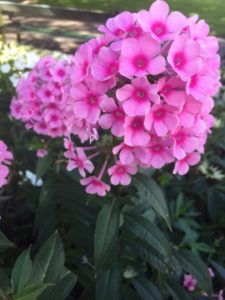 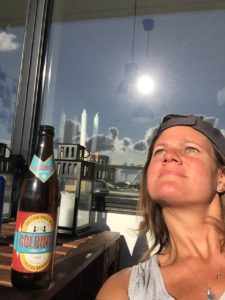 We went home pretty early that night, by 7, more chill and terrace time, more blogging, and off to bed.
Headed out in the morning for Bremen, Germany. Yes, back to Germany. Only because the train ride to Amsterdam is 12+ hours and that’s just too much, so I broke it into 2 legs of 6 hours each and Bremen was a reasonable middle point. I’m not sure I’m going to be happy with that decision or not. I’m on the train to Bremen now, as I write this. We shall see. I somewhat wish I had these extra two days somewhere else, like Barcelona or Greece or Prague or Switzerland, but we can only do SO MUCH. HA. Live and learn.